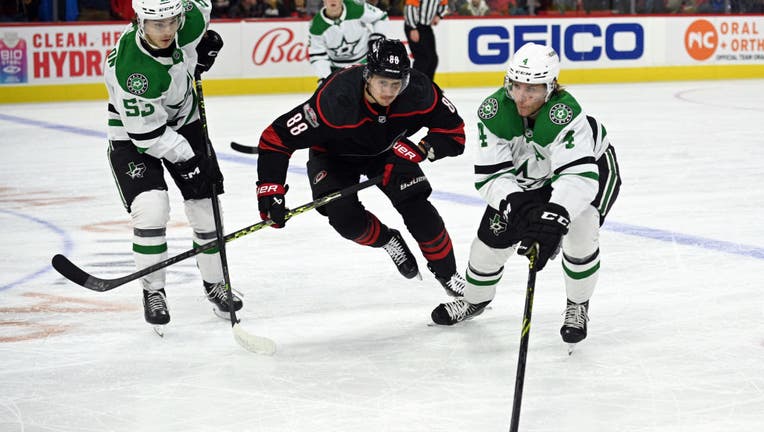 Stefan Noesen, Andrei Svechnikov, Teuvo Teravainen and Seth Jarvis scored for the Hurricanes, who won their fourth straight game. Brent Burns had two assists, and Antti Raanta made 26 saves in his first outing since Dec. 1.

The Stars had possession for most of the first two minutes of overtime before Necas took the puck almost the length of the ice. Svechnikov collected a rebound and fed Necas for his 13th goal of the season.

"He made a great play back to me," Necas said.

"A big point, down 4-2 in the third," Stars coach Pete DeBoer said. "Quite a bit of adversity all night."

"I liked that we just kept playing, whatever happened," he said.

Benn gave the Stars just their fourth power-play goal in an eight-game stretch, tying it at 2 at 5:38 of the second.

"This team has been able to find that spark at times," Pavelski said.

Teravainen had just one assist in the past five games since returning to the lineup after missing 10 games with an injury. He assisted on Saturday’s first goal and put the Hurricanes ahead 3-2 at 13:54 of the second, with his first goal of the season coming on a 5-on-3 power play.

"He needed it," Brind’Amour said. "Just for his own confidence."

Seguin and Hakanpaa, a former Carolina defenseman, scored in a 1-minute, 42-second span of the third period to tie the game with 9:13 to play in regulation.

Three of Dallas’ goals came on redirections, something that left Brind’Amour saying there wasn’t much defense for those. The Stars realized they had to be creative.

"In tight games playing against good teams, you’ve got to find a way to get free and get your stick on it," Pavelski said.

Raanta played a complete game for the first time since Nov. 26, when he last registered a victory. He covered the puck on a Dallas scoring chance in overtime and received a good review from Brind’Amour despite the Hurricanes surrendering four goals in regulation for just the second time during a 10-game span.

"You need to make the saves at the right time, and he did," Brind’Amour said.

It’s the first time Svechnikov has scored in consecutive games since had five goals combined in games on Oct. 17 and 20. ... Defenseman Jalen Chatfield’s assist on Svechnikov’s goal gave him his first point of the season. He was one of two NHL skaters without a point through at least 29 games played this season. ... Pavelski played in his 1,200th game. He’s third among active U.S.-born skaters in games played behind Phil Kessel (1,236) and Ryan Sutter (1,312).

Stars: At Columbus on Monday.

Hurricanes: Home vs. Pittsburgh on Sunday.