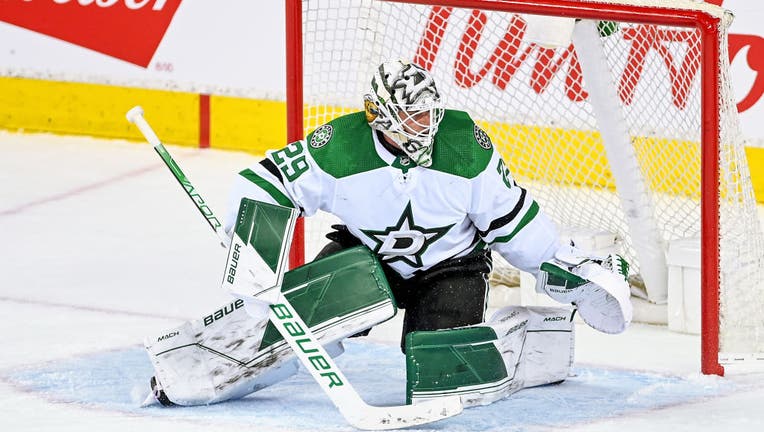 CALGARY, AB - MAY 03: Dallas Stars Goalie Jake Oettinger (29) covers his net during the third period of game 1 of the first round of the NHL Stanley Cup Playoffs between the Calgary Flames and the Dallas Stars on May 3, 2022, at the Scotiabank Saddle

The Flames won Game 1 in a shut out Tuesday night in Calgary. Their single goal was the only blemish for Stars goalie Jake Ottinger, who was making his first playoff start.

Dallas will try to back up his solid play with some offense Thursday night.

"There just seems like there were a lot of penalties. You know, they were calling stuff tight. So, you know, there's going to be power plays and penalty kills.  And, you know, I thought we did a good job on the P.K. And uhm, our power plays gonna get their looks and they're going to find themselves again and so we just gotta continue to do well on special teams," Ottinger said. "I've been to playoff games as a fan and, you know, the intensity. But when you're between the pipes its a whole different ballgame. And it's a dream come true to be a starting goalie in the playoffs here. I'm gonna just try to give me team a chance to win."

The puck drops at 9 p.m. Thursday in Calgary.

The series moves to Dallas for Game 3 on Saturday.