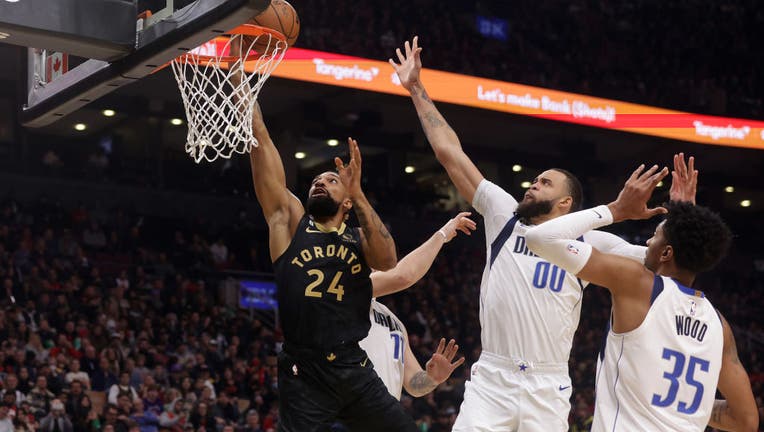 TORONTO (AP) - O.G. Anunoby scored 12 of his 26 points in the fourth quarter, Fred VanVleet also had 26, and the Toronto Raptors beat Dallas 105-100 Saturday, snapping a four-game losing streak against the Mavericks.

Chris Boucher scored a season-high 22 points and had 13 rebounds as the Raptors improved to 7-2 at home.

Luka Doncic scored 24 points and Dorian Finney-Smith had 16 as the Mavericks lost their third straight. Dallas is 1-6 on the road.

Doncic, the NBA’s leading scorer, shot 8 for 15, going 2 of 4 from 3-point range. He had nine assists and seven rebounds.

Dallas trailed 81-73 to begin the fourth quarter but took its first lead of the second half at 84-83 on a pair of free throws by Doncic with 9:15 remaining. Toronto scored eight of the next nine points to lead 90-85 with 6:57 left.

Finney-Smith tied it 90-all on a 3-pointer with 3:48 left but Juancho Hernangomez scored to restore Toronto’s lead, and Anunoby made a pair at the line to make it 95-92 with 2:12 remaining.

Doncic scored with 26 seconds left to cut it to 101-100, but Thad Young answered with a pair of free throws. Dallas used its final timeout to draw up a play, but Finney-Smith turned the ball over and Anunoby was fouled, sealing it at the line.

VanVleet returned for Toronto after sitting out Wednesday’s loss to Brooklyn because of a non-COVID illness, but Scottie Barnes missed his second straight game because of a sprained left knee.

Dallas led by as many as 15 in the opening quarter, scoring 11 points off six Toronto turnovers to lead 29-24 after one. The Raptors led 54-52 at halftime.

VanVleet and Anunoby each scored eight points in the third and Toronto capitalized on seven Dallas turnovers to take an 81-73 lead to the fourth.

Mavericks: Kleber returned after missing the past four games because of a sore back. … Dallas shot 1 for 9 from 3-point range in the second quarter and went 1 for 7 in the third. The Mavericks finished 11 for 39.

Raptors: Boucher had six rebounds in the first quarter, one more than the entire Mavericks team. … F Justin Champagnie (back) was not available. … Hernangomez matched his season high with 10 points. … Outscored Dallas 25-5 in second-chance points.