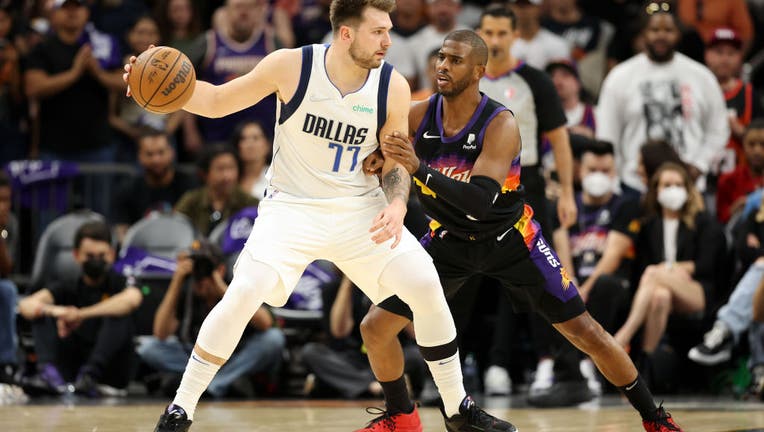 PHOENIX, ARIZONA - MAY 15: Luka Doncic #77 of the Dallas Mavericks handles the ball against Chris Paul #3 of the Phoenix Suns in Game Seven of the 2022 NBA Playoffs Western Conference Semifinals at Footprint Center on May 15, 2022 in Phoenix, Arizona

PHOENIX, Ariz. - The last time the Dallas Mavericks were in Phoenix they put a historic beat down on the Western Conference's top-seeded Suns, winning Game 7 123-90 in a game that wasn't even as close as lopsided score looks.

Wednesday night, Luka Doncic and the Mavs are returning to Phoenix to start a new season with high expectations after their trip to the Western Conference Finals.

The Mavs face an uphill climb this year. Jalen Brunson took the money and ran to play with his dad in New York, and the return of players like Kawhi Leonard and Zion Williamson has the Western Conference looking pretty formidable.

But the Mavs have Luka.

Doncic is the favorite to win the MVP Award (+500 on FanDuel) and is expected to have to carry a heavy load.

Last year's stalwarts Dorian Finney-Smith, Spencer Dinwiddie, Maxi Kleber and Reggie Bullock return to the squad this year along with some new additions.

Tim Hardaway Jr. will also be back on the floor after missing a majority of last season with a fracture in his foot.

Still, betting markets have the Mavericks around 48 wins for the season, down from 52 wins last year.

"We still don't feel like we're getting the respect that we should, but I like having that chip on my shoulder. We get to beat everybody's expectations. It feels good proving people wrong," said Finney-Smith.

The Mavs and Suns game tips off at 9 p.m. on ESPN.

The official Mavs watch party will be held at the AT&T Discovery District in Dallas starting at 7 p.m.

Dallas plays their first game at the AAC on Saturday against the Memphis Grizzlies.