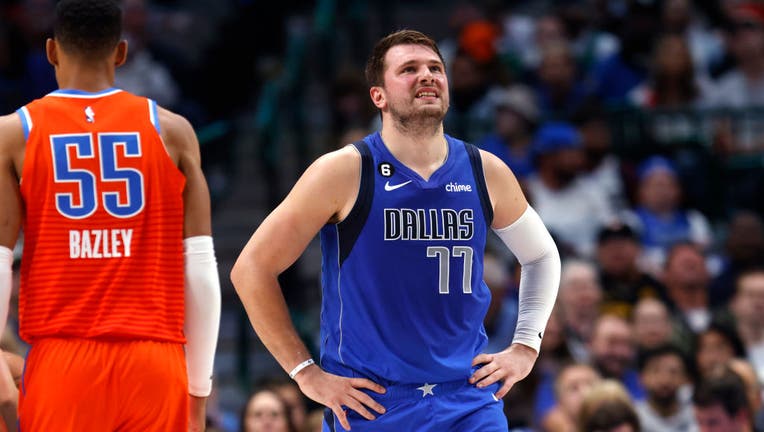 DALLAS, TX - OCTOBER 29: Luka Doncic #77 of the Dallas Mavericks reacts after a collision against the Oklahoma City Thunder in the first half of the game at American Airlines Center on October 29, 2022 in Dallas, Texas. NOTE TO USER: User expressly a

DALLAS (AP) - Shai Gilgeous-Alexander scored 38 points, and Oklahoma City erased an eight-point deficit in the final two minutes of regulation in a 117-111 overtime victory against the Dallas Mavericks on Saturday night.

The Mavericks turned a one-point deficit after three quarters into a 15-point lead without Luka Doncic, and the Thunder stormed back from 16 down after the Dallas star returned.

Doncic had his fifth consecutive 30-point game to start the season with 31 but was just 8 of 23 from the field. He had his second straight triple-double with 16 rebounds and 10 assists.

Isaiah Joe, who didn’t play until the fourth quarter, scored eight of his 15 points in overtime, including a 3-pointer that broke a 101-all tie and started a 7-0 run in the extra period.

Gilgeous-Alexander, who had a season-high nine assists, scored six of the first nine Oklahoma City points in overtime in a third consecutive victory for the Thunder following an 0-3 start.

"Good poise, obviously," Thunder coach Mark Daigneault said. "It’s hard to win that game. A lot has to go your way. A lot went our way that we couldn’t control, but I felt we controlled what we could, and that’s what put us in a position to keep closing that gap."

Dallas still led by five with a minute remaining in regulation when Gilgeous-Alexander hit a jumper for a 99-96 deficit.

After Dorian Finney-Smith missed inside and Reggie Bullock was off on a 3, Joe connected on a tying 3-pointer. The Mavs’ Luka Doncic missed on a contested 17-footer at the buzzer in regulation.

"We had control of the game," Mavericks coach Jason Kidd said. "When you look at early in the season, we have had leads in the fourth, and we’ve given them away."

Joe, who was signed by the Thunder on Oct. 16 after being waived by the 76ers, was praised by his coach for helping ignite the fourth-quarter comeback.

"Your path to winning the game at that point is very, very difficult, but we try to make every decision to try to cut into it," Daigneault said. "I wanted to try another guy. He just got here. I don’t know much about him. He deserves the credit."

It’s the second consecutive overtime game for the Mavs, who beat the Nets in OT in Brooklyn on Thursday. The late collapse was similar to a season-opening loss at Phoenix.

Thunder: Luguentz Dort scored 16 points, and Darius Bazley had 15. ... Gilgeous-Alexander was 15 of 27 from the field and made all eight of his free throws.

Mavericks: Doncic assisted or scored on Dallas’ first seven baskets but ended up minus-25, his worst since a 21-point loss to Charlotte last March. ... Spencer Dinwiddie scored 20 points. ... Christian Wood scored a season-low 11 points for the second consecutive game.

Rookie No. 12 overall pick Jalen Williams returned for Oklahoma City after missing four games since sustaining a right orbital fracture in the opener. Williams, who wore a mask to shield the injury, had 13 points and four assists in 27 minutes.

"It doesn’t really obstruct anything, but I hate it," Williams said. "I don’t like the way it looks. The people over at the hospital did a good job doing it so it worked out well."

Dwight Powell scored 13 points starting at center for the first time in place of JaVale McGee, who was inactive for rest on the first night of a back-to-back with Dallas in the midst of three games in four nights.

Powell started 71 games last year but had been limited to just seven minutes in one game this season at the end of a blowout victory over Memphis.

Mavericks: Host Orlando on Sunday to finish their first back-to-back of the season.