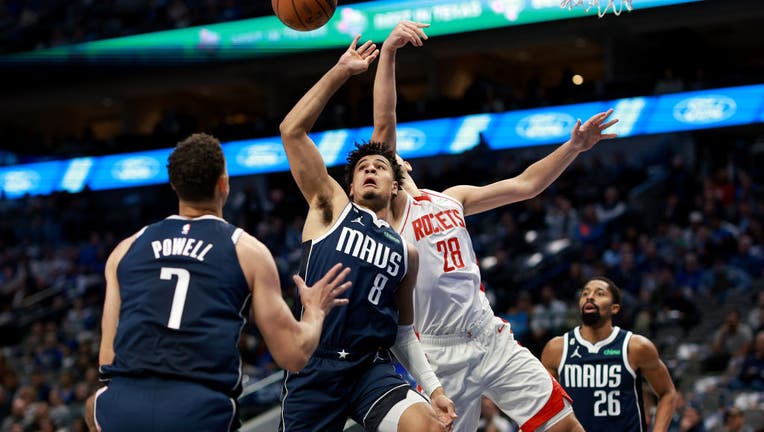 DALLAS, TEXAS - NOVEMBER 16: Josh Green #8 of the Dallas Mavericks rebounds the ball against Alperen Sengun #28 of the Houston Rockets in the first quarter at American Airlines Center on November 16, 2022 in Dallas, Texas. NOTE TO USER: User expressl

DALLAS (AP) - Kevin Porter Jr. had 17 points and 11 rebounds and eight assists, and the last-place Houston Rockets took advantage of Luka Doncic's absence in a 101-92 victory over the Dallas Mavericks on Wednesday night.

Doncic was out for rest a night after he played 40 minutes to help prevent the Mavericks from blowing a 25-point lead in a two-point victory over the Los Angeles Clippers.

Christian Wood, traded to Dallas in the offseason after blossoming from a journeyman into a 20-point scorer for the Rockets, had 26 points and eight rebounds in his first game against his former team.

The Rockets, who came in with the NBA's worst record, recorded 19 blocks, their most since they had a franchise-record 20 on the same date 38 years earlier (1984). Houston held the Mavericks to a season-low 30% shooting.

The last block was by Jabari Smith Jr. on a driving layup attempt by Tim Hardaway Jr. with the Rockets leading 93-90 with three minutes remaining. The previous high for blocks for a Dallas opponent was 16.

"You give a team 19 blocks, you deserve to lose," said Hardaway, who led the Mavericks with a season-high 28 points. "They were protecting the paint. They did their thing."

Alperen Sengun, a 20-year-old from Turkey, had a career-high five blocks to go with 14 points and seven rebounds.

Porter had three blocks along with Usman Garuba, who tied his best in blocks and assists (three) to go with a career-high 12 points and nine rebounds.

"Nineteen blocks, that's crazy," said Garuba, a 20-year-old from Spain in his second season. "I think we've got the potential to a very good defensive team."

Jalen Green scored 17 points as the Rockets won for just the third time while ending a three-game losing streak. Houston was swept by its Texas rival for the first time in a decade last season, but ended that four-game skid.

Hardaway needed 26 shots, making 10, while Wood was 9 of 22 and the Mavericks didn't have any starters in double figures in the first missed game of the season for Doncic.

The Rockets went in front for good on free throws by Smith midway through the fourth quarter, when the Mavericks shot 21% and made 1 of 17 from 3-point range.

"We just to come out and be more prepared," said Dorian Finney-Smith, who combined with fellow starters Reggie Bullock and Spencer Dinwiddie to go 2 of 23 from long range. "We settled a little bit, but we got great looks. We hit some of those shots, it would be a different game."

The Mavericks played a tribute video for Boban Marjanovic, the 7-foot-3 Dallas fan favorite sent to Houston in the Wood trade. He made a heart shape with his arms as the crowd cheered.

Marjanovic and Doncic were close as teammates, and shared a hug and brief chat near midcourt after the first-half buzzer. Marjanovic got more cheers when he was the first one out to warm up before the second half. Marjanovic didn’t play.

Rockets: Kenyon Martin Jr. was called for a flagrant foul in the first quarter when his left knee hit Dwight Powell in the face as Martin hung on the rim after a dunk. ... Garuba was 2 of 2 on 3-pointers, putting him at 6 of 7 from long range this season.

Mavericks: G Josh Green replaced Doncic in his first start of the season, scoring four points in 17 minutes. ... F Davis Bertans hit a 3-pointer less than a minute into his season debut at the start of the second quarter. He has been out with a right knee injury. Those were his only points.

Rockets: A four-game homestand starts Friday against Indiana. The Pacers are on their longest winning streak in the series at five games after losing the previous five.

Mavericks: The first of consecutive home games against Denver is Friday. The back end Sunday will finish a stretch of four home games in six nights.