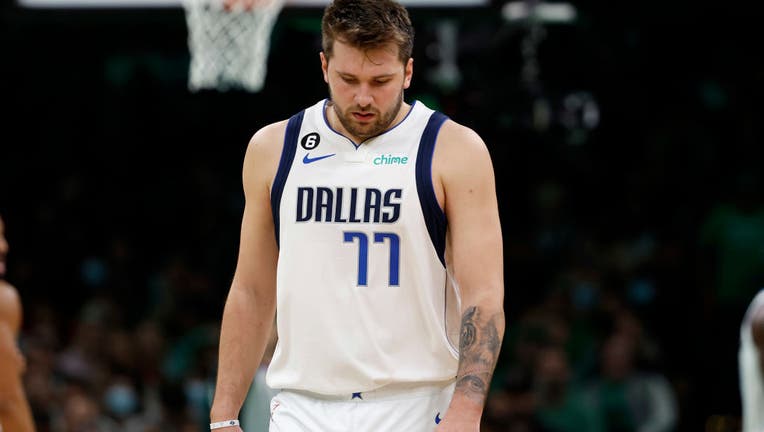 BOSTON, MA - NOVEMBER 23: Luka Doncic #77 of the Dallas Mavericks hangs his head as he walks back up the court during the third quarter of their loss to the Boston Celtics at TD Garden on November 23, 2022 in Boston, Massachusetts. NOTE TO USER: User

BOSTON (AP) - Jayson Tatum had 37 points and 13 rebounds and Jaylen Brown scored 31 points on Wednesday night to help the NBA-best Boston Celtics bounce back from a rare loss and beat the Dallas Mavericks 125-112.

The Celtics, who have a league-leading 14 wins, had won nine straight before losing to the Bulls on Monday.

Luka Doncic scored 42 points for the Mavericks, who had beaten Boston four straight times. Three of the wins came on a 3-pointer in the final seconds, and two of those were with no time at all on the clock.

But Doncic wasn't able to keep this one close.

And Tatum bested Doncic each time.

Tatum drove for a two-handed, rim-hanging slam, then Doncic was called for an offensive foul. Doncic fouled Tatum, who hit two free throws to give Boston a 121-107 lead, then Tatum blocked Doncic's layup attempt.
Brown hit a 3-pointer to make it 124-107 and ice it.

Spencer Dinwiddie, who was listed is questionable with a dislocated shoulder, had 15 points for Dallas.

Boston led 17-14 six minutes into the game before scoring nine straight points - seven of them by Brown.

Tatum scored 16 points with five rebounds in the second quarter alone, when the Celtics led by 13 points, 55-42, before scoring 13 of the next 14 points to open a 25-point lead.

Mindy Kaling and B.J. Novak, from NBC's "The Office," were sitting courtside.

Mavericks: At Toronto on Saturday.