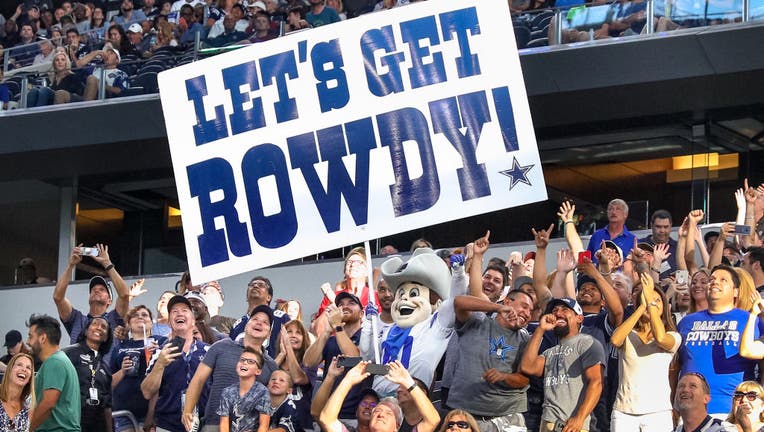 ARLINGTON, TX - AUGUST 26: Dallas Cowboys mascot Rowdy pumps up the crowd prior to the preseason football game between the Dallas Cowboys and Arizona Cardinals on August 26, 2018 at AT&amp;T Stadium in Arlington, TX. (Photo by Andrew Dieb/Icon Sp

ARLINGTON, Texas - Another Dallas Cowboys football season is upon us.

Before you head to Arlington to cheer on America's Team at AT&T Stadium, there are a few things you should know.

The stadium entrances will open two hours before kickoff.

For those looking to tailgate, it is only allowed in the grass areas on the perimeter of the parking lots and can only be 9-feet wide and 12-feet deep.

Tailgating is allowed when the parking lots open, and then up to two hours after the game.

Deep fryers or any oil-based cooking or frying are not allowed, along with open flame fires of any kind. Charcoal or gas cooking is allowed.

Tailgaters are not allowed to save spaces, sell food, drinks, or merchandise, have weapons and fireworks, advertise or promote products, or picket, political campaign, or solicit.

Can I Bring My Bag or Purse to the Cowboys Game?

AT&T Stadium has strict rules about bags. The only bags allowed into the stadium are clear tote bags that do not exceed 12″x6″x12″, plastic storage bag up to one gallon in size, and small clutch purses no larger than 4.5″ x 6.5″, with or without a handle or strap.

AT&T Stadium has 15 parking lots with about 12,000 available spots. A parking pass can be bought beforehand. There are also almost 12,000 parking spaces available around Globe Life Field that can be used.

There are two passenger drop-off zones at AT&T stadium. One is on the north side of Randol Mill Road in Lot 1, and the other is on the south side of the stadium, off of Cowboys Way in Lot 6, though post-event traffic may cause these areas to be inaccessible for pick up.

Rideshare location for this season will be Lot 15.

Taxis will be available at the far west end of Miller LiteHouse off of North Collins Street and Cowboys Way.

If You Lose an Item at AT&T Stadium

AT&T Stadium has an online form to fill out if you lost an item there. Lost items will be held in a locked storage area for 60 days and are then either disposed of or donated.

Can I Bring a Sign into the Game at AT&T Stadium?

Signs must be "handheld, event-related, in good taste and cannot obstruct another guest’s view," and cannot have "commercial messages, logos or political endorsements."

What Channel Is The Cowboys Game On?