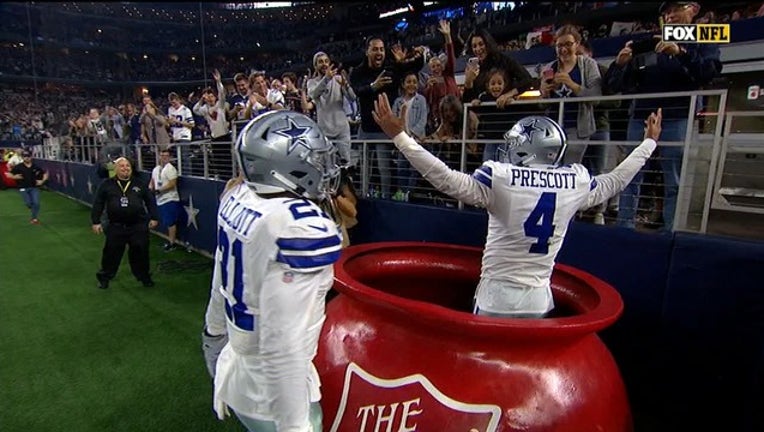 ARLINGTON, Texas (AP) - Amari Cooper had a 90-yard touchdown catch while finishing with 180 yards receiving and two scores and the Dallas Cowboys pulled even with Washington atop the NFC East with a 31-23 Thanksgiving victory over the Redskins on Thursday.

Cooper had the most yards receiving for the Cowboys on Thanksgiving, along with the longest catch of his career and Dak Prescott's longest completion in his three seasons. Cooper's other TD was a 40-yarder.

Ezekiel Elliott ran for 121 yards with a score as the Cowboys (6-5) won their third straight game since their first home loss, to Tennessee in the Dallas debut of Cooper following a trade. Dallas beat Washington for the eighth time in nine Thanksgiving games, and second in three seasons.

The former Texas Longhorns star threw three interceptions to offset two touchdown passes. McCoy won his two previous starts at the home of the Cowboys, one for the 2009 Big 12 championship and the other his most recent NFL victory with the Redskins in 2014.

DETROIT (AP) - Chase Daniel made the most of his chance to fill in for Mitchell Trubisky, having the best day of his journeyman career.

Daniel set career highs with 230 yards passing and two touchdowns to keep Chicago rolling with a win over Detroit.

The NFC North-leading Bears (8-3) sealed their fifth straight victory with Kyle Fuller's interception in the end zone with a little more than a minute left.

Detroit (4-7) has lost four of five, plummeting to last place in the division.

Chicago broke a 16-16 tie on Eddie Jackson's 41-yard pick-6 with six minutes remaining. It was Jackson's second consecutive game with an interception returned for a touchdown. It's also the fifth career defensive touchdown for the 2017 fourth-round pick.