A local Olympic hopeful is wondering if she'll have to put her dreams on hold. FOX 4's Jeff Kolb got a look at her quest to be in the Tokyo games.

DENTON, Texas - A former University of North Texas high jumper hopes to land a spot on Isreal’s Olympic team. But she’s facing uncertainty due to the coronavirus pandemic.

It’s Shay Bareni’s favorite sensation in the world -- raising the bar, rising up and leaping at her dream.

Bareni has put her soul into trying to go as high as she possibly can in high jumping. That’s why she’s training for the 2020 Summer Olympics in Tokyo.

And at a time when most of the sports world has shut down, the word is that the biggest sporting event is still on.

“They are saying that they’re still having it same day, the same time. They’re not changing anything,” she said.

But there’s a lot of uncertainty. The pandemic is throwing off training schedules and canceling important competition opportunities – a stressful curveball with the games just 129 days away.

“It's scary but I try to see it in the most positive way where you just, you just have to trust that everything has a higher purpose, keep looking at your goal, your target and run towards it,” she said. 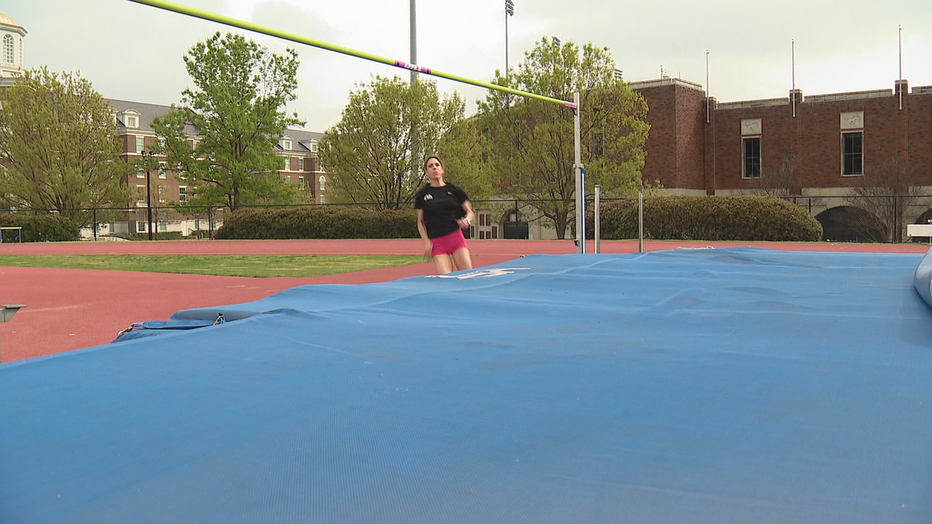 But to know Bareni’s journey is to understand that she’s gone through way too much to let COVID-19 shake her. Growing up in a region of northern Isreal called Golan Heights, there weren’t high level jumping coaches.

Bareni would take a three and a half-hour bus to Jerusalem as a 17-year-old three days a week. It wasn’t just a big commitment. It was a risky one.

“We had a lot of the incidents of bombers on buses. So it was kind of a risk. One time, I remember I took the bus from the track in Jerusalem to the bus station to get on the bus to Golan Heights and the same bus route an hour later exploded. So I missed my death I guess in one hour. I survived, it was... thank God. I knew the risk but I was just so determined to make it happen. I knew God would watch over me and it would be okay,” she said.

Next, she served in the military. It’s something all 18-year-old Israelis are required to do by law.

She spent two years as a sergeant in the intelligence branch of the Israeli defense force. When her two years were up, she was tempted to keep serving.

But a full-ride scholarship offer to go jump for the University of North Texas took he journey in a different direction. With the Mean Green, Bareni set school and conference records, becoming an NCAA All-American.

When she graduated in 2005, the Summer Olympics in Rio were in her sights. But her injuries kept her from pursuing the games.

Bareni took two years off. But with the Tokyo games coming, she decided to jump at her dreams one more time.

Over a decade removed from those three and a half-hour bus rides to Jerusalem, Bareni’s back on the move again, driving to Houston for training every Thursday.

If the pandemic takes that routine away from her she said, “I’ll find a way.”

Where the journey will lead and what accomplishments it will produce is as uncertain as the coronavirus crisis. But what Bareni is certain about is that raising the bar and going for it will give her fuel for the rest of her life.

“For me, it means that I can make all my dreams come true. If I believe in myself and work hard to make it happen, I’ll make anything happen,” she said.