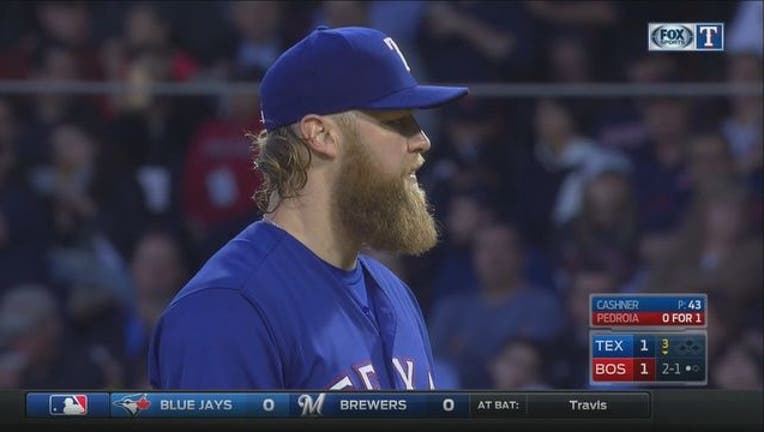 BOSTON (AP) - Xander Bogaerts had three RBIs and twice scored on wild pitches, Dustin Pedroia had a two-run double during a four-run sixth inning and the Boston Red Sox beat the Texas Rangers 11-6 on Tuesday night.

Joey Gallo got his 14th homer for Texas, and Shin-Soo Choo went 2 for 5 with two RBIs.

Texas entered having won 11 of 12. The 11 runs allowed marked a season high.

Andrew Cashner (1-4) pitched five innings, allowing five runs, six hits and four walks. He also threw a pair of wild pitches, one of them allowing Bogaerts to score from third and put Boston up 2-1 after three.

Boston piled up the runs behind some timely hitting and a little help from the Rangers defense. Bogaerts was 3 for 5 and took advantage of misfires by Cashner and Jeremy Jeffress to score, and Andrew Benintendi came home on a balk by Alex Claudio in the eighth. Pedroia and Mitch Moreland finished with two hits and two RBIs apiece.

Texas went to the bullpen in the sixth and the Red Sox broke open the game. Deven Marrero and Mookie Betts both walked with two outs and scored on Pedroia's double to right. Bogaerts followed with another double that scored Pedroia. Two more walks loaded the bases and Bogaerts scored on Jeffress' wild pitch, putting Boston up 9-3.

The Red Sox broke a 2-all tie with three runs in the fifth after loading the bases with nobody out.

Marrero and Betts started the rally with back-to-back singles and Pedroia walked to load the bases for Bogaerts, who drove in two with a single to left. Cashner walked Benintendi to load the bases again and Bogaerts scored on a sacrifice by Moreland.

Rangers: 3B Adrian Beltre (strained right calf) did some running before the game and is making progress toward a return, manager Jeff Banister said. Beltre's next evaluation will be Thursday, and he could be back by the beginning of June, Banister said. ... Boston sent RHP Tyson Ross (thoracic outlet syndrome) on a rehab assignment to Triple-A Round Rock.

Red Sox: Called up 1B Sam Travis from Triple-A Pawtucket and optioned RHP Hector Velazquez to Pawtucket. Travis will platoon with Moreland. ... 3B Pablo Sandoval (right knee sprain) was ill and out of the lineup for Pawtucket in a rehab game. Manager John Farrell said Sandoval might need only two more rehab starts before returning.

Rangers: LHP Martin Perez (2-5, 3.71 ERA) struck out eight in his last start, allowing two runs on five hits over seven innings Thursday against Philadelphia for his second win of the season.