Billy Gillispie not only has received a life saving kidney, but his story has inspired more lives to be saved.

DALLAS - What happens from the tip-off, to the final buzzer of a basketball game, rarely defines our lives.

It’s in all of those moments, between the games, when basketball tends to leave the greatest mark on the people who love it.

For college basketball coach Billy Gillispie – who has led programs at Texas A&M, Kentucky, Texas Tech and currently Tarleton State – the game’s impact is emotional to think about.

"It’s just something else, what this game can do," said a teary-eyed Gillispie.

Growing up in Graford, TX, basketball was the way of life for Billy and his sister, Jerry Hoffman.

"We’d go to the gym and he would shoot and I was a rebounder for him," says Jerry. "I became a pretty good passer just because he wouldn’t let me shoot! But the whole town revolved around the sport of basketball."

Their basketball childhood led to basketball livelihoods – Billy at the college level and Jerry coaching girls’ high school basketball in Texas for 33 years.

Gillispie’s journey included highs and lows, but nothing that could fully prepare him for 2017, when he was diagnosed with stage 4 kidney failure. It meant he needed a miracle to keep his journey going.

"You’re thinking that hey it may be over," said Gillispie.

Jerry wanted to save her brother’s life, but she was not a match.

On a December Saturday, in Tahlequah, Ok, an article about Billy’s story flashed across the twitter feed of another college basketball coach’s wife – Ericka Downey.

Downey didn’t know much about donating a kidney, but she had a feeling.

Tweeting like crazy about Billy’s story, Downey caught the attention of one of Gillispie’s former assistant coaches, who connected them. After a battery of tests, she found out a month later she was a match to be his donor. Gillispie and Downey met at the 2018 Final Four for the first time and then traveled shortly after to The Mayo Clinic in Minnesota for a successful kidney transplant.

"There’s no way to explain the amount of grateful feelings that you have for someone that’s just donated your life to you," said Gillispie.

"She is," said Gillispie. "I know when you feel it, and when you see it and when you’re affected by it what an angel is, and she’s definitely an angel."

"At the end of the day I feel like it’s something God has given us together," said Downey.

"I’ve heard about Billy for a long time, even before he was sick."

Freeman gave her children, Braeden and Savannah, a basketball upbringing. When Savannah played for the Mart Lady Panthers, it led Nikkey to a new friend -- Jerry Hoffman.

"What happened with savannah and I, we developed a player-coach relationship," remembers Hoffman.

The game of basketball had helped the Freeman’s survive their greatest loss.

Braeden was murdered," said Freeman. "If it weren’t for athletics, I don’t think Savannah would have been able to continue on."

In 2018, Nikkey found out she needed a kidney. Her life became consumed with dialysis, but she found her reason to push through it.

"Since Braeden passed away, I’ve never been afraid to die," said Freeman. "But I don’t want to leave Savannah."

After two years of waiting, Freeman got the call – there was a kidney.

She rushed up from Mart to Dallas, went into the operating room and woke up – to heartbreak.

"The donor team cut the renal artery too short," said Freeman. "I just started crying and saying no, no, no, no, no."

All the while, Jerry Hoffman was still on the Mayo Clinic’s mailing list – from her attempt to be Billy’s donor.

"The letters would say, ‘donation still an option,’" said Hoffman.

She realized she was interested in being a donor – for Nikkey Freeman.

Holding back tears, Hoffman said, "To have that sort of impact on someone else, why not?"

This time, jerry was a match. In January, the better part of a year after her heartbreak in Dallas, she returned with new hope.

Her new surgery just so happened to fall on what would have been her late son Braeden’s 26th birthday.

"We knew that Braeden was with us on this one," said Freeman. "Yeah, this is meant to be. This is going to happen this time."

The surgery was a success. Nikkey Freeman is free from dialysis. Her wait for a miracle donor is finally over.

Freeman said, "I can actually live my life."

Jerry Hoffman finally got her chance to save a life.

"It’s the most rewarding thing that you can do," said Hoffman.

Her older brother, Billy, moved by his sisters amazing gift to Nikkey.

"I am proud," said Gillispie. "In a particular situation like this, it’s a real moment." 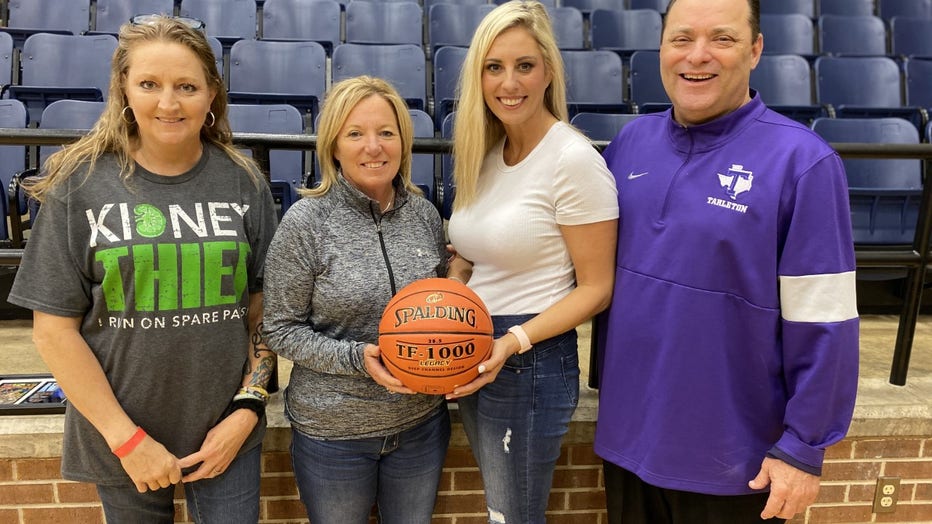 This March there was another moving moment, as a new basketball family – Billy Gillispie, Ericka Downey, Jerry Hoffman and Nikkey Freeman – came together in the same room for the very first time.

Billy: "To sit here and listen and cry – goodness gracious what a day this has been."

Ericka: "Hearing the impact it made – Jerry’s donation made on Nikkey, it really hit home for me."

Nikkey: "It’s still very surreal that all this has happened for all of us."

Jerry: "Ericka and I both understand the other part of it is we have a gift too."

It’s a gift, they hope will inspire others to give. There are approximately 100,000 people in the United States currently waiting on the transplant list. In 2020, there were roughly 7,000 people who died while waiting on the list.

The new basketball family knows what they’ve done for each other will define their lives more than any on-court moment ever could. Thanks to Ericka and Jerry’s gift, the four of them will be linked forever.

If you are interested in learning about the process of becoming a donor, you can find more information at www.organdonor.gov.