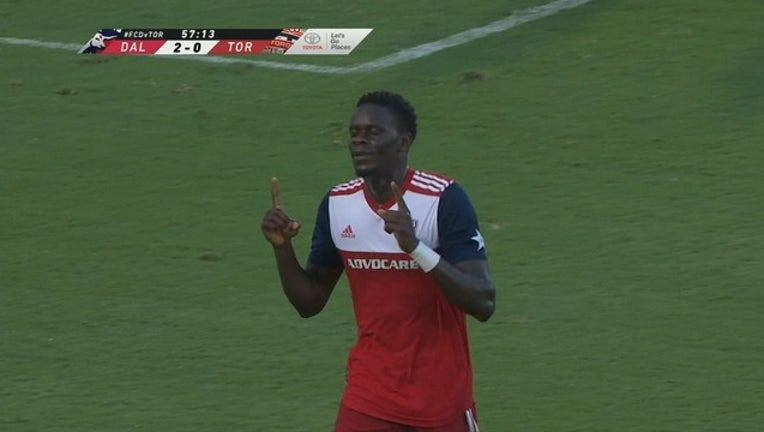 Badji's short tap-in from the left of the goal at the 41st minute drew the ire of Toronto defenders who argued he was offside but the goal stood. Bressan scored his first goal of the season on a quick header off a corner kick in the 51st.

Badji finished the scoring in the 58th, taking a pass on an uncontested run down the left and bending a shot in.

Sixteen-year-old Ricardo Pepi made his MLS debut for Dallas (7-6-4), entering the game in the 84th minute.

FC Dallas has three wins in its last five games. Toronto FC (5-7-4) is winless since May 4.

Boateng scored his first goal of the minute in the 12th minute, taking a pass in stride running to the left side of the box and punching a left-footed shot across his body back to the right. Favio Alvarez connected in the 15th on a shot that resulted from FC Cincinnati's failure to clear the ball out of its own end. A pair of defenders collided trying to head the ball from the right of the box, giving Alvarez a clear shot.

The kick from about 19 yards was set up when defender Lalas Abubakar was called for a foul. Reyna's strike sailed over the wall and goalkeeper Tim Howard seemed to lose sight of the ball until it was in the net.

Diego Rubio and Andre Shinyashiki scored for Colorado (4-9-4). After losing eight straight matches, the Rapids are 4-0-2 in their last six.

The free kick was set up when Mohammed Adams was called for a hand ball in the penalty area. Rusnak has six goals this season.

Chicago struck early when Aleksandar Katai scored in the fifth minute on a free kick.

Marvin Loria opened the scoring for Portland in the 39th minute, scoring off assists from Jorge Moreira and Valeri.

Valeri converted a penalty kick in the 61st minute and assisted on Brian Fernandez's goal in the 63rd minute and Jeremy Ebobisse's score in the 75th.

Steve Clark earned the shutout for the Timbers (5-7-2).

Houston, which had just one shot on goal, slipped to 7-4-3 with the loss.