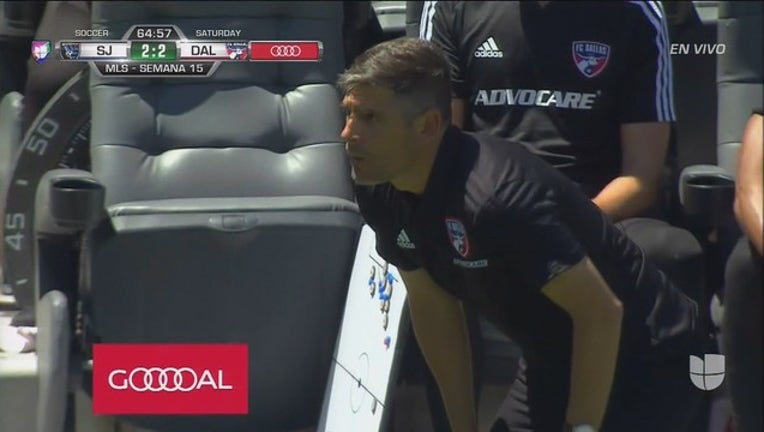 SAN JOSE, Calif. (AP) - Francis Atuahene scored less than a minute after entering as a substitute in his MLS debut and FC Dallas held on for a 2-2 draw against the San Jose Earthquakes on Saturday.

Atuahene, who turned 22 on Saturday, entered as a substitute in the 64th minute and made it 2-all for FC Dallas (6-6-4) early in the 65th with a right-footed shot off the outside of his foot.

After trailing at the break, the Earthquakes (5-6-4) rallied with two goals in the first 10 minutes of the second half. Chris Wondolowski finished Magnus Eriksson's cross in the 46th minute for his eighth goal in four games. Eriksson made it 2-1 in the 54th with a left-footed shot that slipped past the goalkeeper but was stopped by Matt Hedges after it crossed goal line. Play initially continued with uncertainty about the goal but video review was used later to confirm it.

In the 27th minute, San Jose goalkeeper Daniel Vega was under no pressure when he misplayed a soft-rolling back pass between his legs to score an own goal that gave FC Dallas the first-half lead.

It was the third straight time FC Dallas got credit for a score on an opponent's own goal, coming off 2-1 win over Seattle on two own goals.