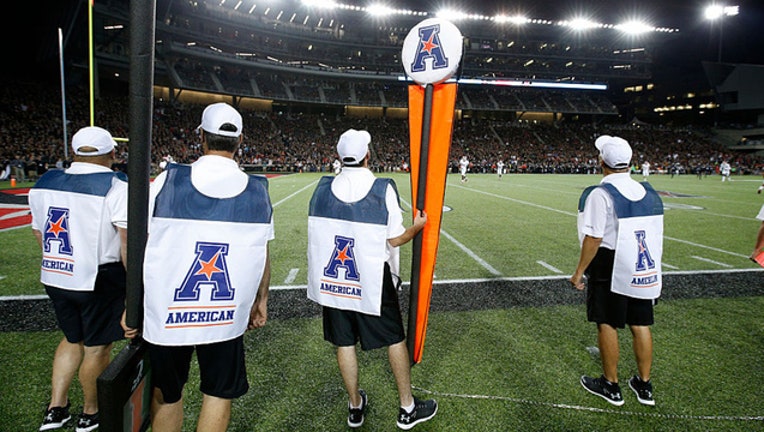 NEWPORT, R.I. (AP) - Schools interested in joining the American Athletic Conference after Connecticut leaves can call Commissioner Mike Aresco. The AAC will not be soliciting applications for membership.

Aresco said Tuesday at the American Athletic Conference media day that the league is leaning toward not replacing UConn and going forward with 11 football schools after the Huskies depart for the Big East.

UConn's return to the Big East was announced last month, but exactly when it departs from the American and how much it will have to pay in exit fees still must be negotiated. Conference bylaws require a 27-month notification period before a school can leave and a $10 million exit fee. Both sides would prefer the transition to happen after this school year, though that will likely cost UConn extra.

"We just want to get this thing done as amicably and efficiently as possible," Aresco said.

The American, which emerged in 2013 from the collapse of Big East football, signed a new 12-year, $1 billion media rights deal with ESPN in March that kicks in next year. The contract does allow for ESPN to adjust if the American loses schools, but it is also possible the terms will stay the same, with larger shares going to the remaining schools.

Aresco declined to speculate on what will happen with ESPN.

It was only two years ago the Big 12 rather publicly explored expansion and several American schools tried to attract an invitation. The Big 12 stood pat. For the American, losing one of its football powers such as two-time defending champion UCF or Houston would have been a substantial blow, but the conference is strong enough now to withstand the loss of UConn's flailing football program.

"We're a powerful conference. Even at 11," Aresco said. "My goal here is to tamp down any of that speculation."

The American has already looked into scheduling an 11-team football conference, which would include abandoning the current division format while still playing an eight-game slate.

Aresco said conference officials already have been in touch with the Big Ten, which had 11 teams for 20 years after Penn State joined in 1993. The American could mimic the Big Ten's old format, giving each team two permanent annual opponents to cultivate rivalries while rotating the other six opponents.

The American is committed to continuing its football championship game. That will require a waiver from the NCAA - one that the conference is likely to get. The Big 12 eliminated its divisions after conference realignment shrunk its membership to 10 but was able to bring back its championship game, matching the top two teams in the standings at the end of the regular season.

The American would look to do the same.

UConn football is likely heading toward independence, with most of its sports set to return to the basketball-centric Big East. Benedict said while that has not been finalized, it is a fair assumption.

"We want to build a successful football program and I don't think that changes whether you're in the American Athletic Conference or any other conference or you're playing as an independent," Benedict said. "There are certain things that you do to try to help support that effort. Scheduling certainly plays a part of that. Scheduling in places where you recruit and you're going to spend time recruiting and feel like you have an opportunity to recruit prospects and get them to come to your program is going to be very important for us. And the type and quality of opponents you compete against obviously has an impact because you can sell and recruit to your schedule."

UConn coach Randy Edsall is 4-20 in his second stint with the school, coming off a 1-11 season. Edsall's first stint began in 1999, when the program was transitioning from I-AA to the highest level of Division I. He guided UConn through four seasons as an FBS independent, then into the Big East, where the Huskies made five bowl games.

Edsall said he believes there is still support for football at UConn, but for now he is focused on 2019 while Benedict and university President Susan Herbst plot a course for the future.

"Then I'll be able to put together a plan moving forward from a recruiting standpoint," Edsall said.