It’s something the former Frisco Reedy High School soccer star has come through.

Something she can now say five incredible words about.

Her dreams as a goalie are still the same today as they were before surviving cancer. Those dreams started playing at Reedy and later for the University of Central Florida.

"I still want to represent the United States and play on big stage," said Turner.

Her dreams and life were in jeopardy after receiving a terrifying diagnosis – Non-Hodgkin’s Lymphoma.

"I felt hopeless," said Turner. "I felt like my world was just caving in and crashing down and I felt like there was nothing I [could] do."

Even if she survived, Turner was staring down the possibility of massive changes to her day-to-day life.

"The tumor consumed most of my hip bone," said Turner. "There was a huge crater that was going to be left after I was done with treatment. When they told me that I might not be able to walk again or walk normally again – that was when I was like, ‘No, I have to get through this.’"

It was in that time, battling for her life, that Nahla Turner discovered a new way to live her life.

"The only thing certain in life is death," said Turner. "You always have to go through life like tomorrow could be your last day – so just do things in life that you’re scared to do, its ok."

Holding onto that spirit, Turner made her way to her cancer free moment – and then back into net for the UCF women’s soccer team. 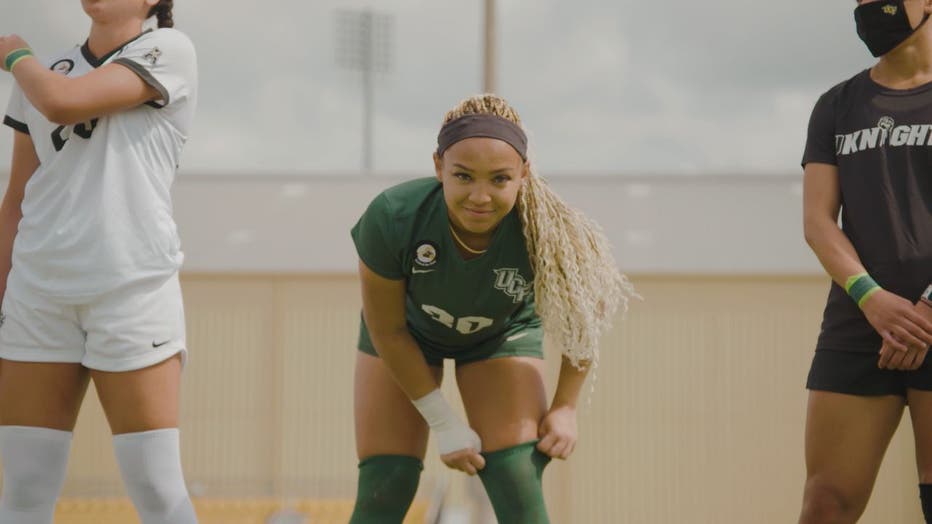 Stepping back on the field, she faced a new fear – diving to make her first save since cancer, not knowing if it would be her last.

"I was so scared to land – to land on that hip," said Turner. "Life just stopped when I was in the air. When I did [land] I was like so shocked because I was finally without pain.

"I’m finally back doing the thing I love the most."

Nahla Turner says she is glad about the battle she’s been through.

"I’m glad it was me because I needed to mature emotionally, mentally. I look at life a lot different than I ever did."

And she hopes that she can spread that life perspective as she continues to chase those dreams – likely seeking out an opportunity to play professionally with a club overseas.

"Use what you’re going through to your advantage," says Turner. "Change your mindset, inspire others."

"Uplift others with your story."