WASHINGTON - Joe Biden has won the presidency, defeating President Donald Trump in the 2020 race for the White House, according to projections by the Associated Press and FOX News.

Biden won the battleground state of Pennsylvania by a thin margin after a protracted vote count, according to projections by the news outlets, flipping another key state that voted for Trump in the 2016 election.

RELATED: In their own words: Joe Biden, Donald Trump issue statements after race is called

Saturday night, Vice President-elect Kamala Harris took to a convention center stage in Wilmington, Delaware ahead of President-elect Joe Biden, met by honking horns and cheers from a crowd of supporters.

Harris thanked voters and poll workers for their tireless efforts, and she began her remarks with a nod to the late Rep. John Lewis.

“So, Congressman John Lewis, before his passing, wrote, ‘Democracy is not a state, it is an act.’ And what he meant was that America’s democracy is not guaranteed, it is only as strong as our willingness to fight for it, to guard it and never take it for granted,” Harris said. “Protecting our democracy takes struggle, it takes sacrifice. But there is joy in it. And there is progress, because we the people have the power to build a better future, and when our very democracy was on the ballot in this election, with the very soul of America at stake and the world watching, you ushered in a new day for America,” Harris said.

The vice president-elect thanked her family and her husband, Doug Emhoff. Harris’ voice was full of emotion as she remembered her late mother, Shyamala Gopalan Harris, who passed in 2009.

“She believed so deeply in an America where a moment like this is possible,” Harris said. “And so I am thinking about her and about the generations of women — Black women, Asian, White, Latina, Native American women — who, throughout our nation’s history, have paved the way for this moment tonight. Women who fought and sacrificed so much for equality and liberty and justice for all,” Harris said. Harris praised Biden for choosing the first female vice presidential candidate. “What a testament it is to Joe’s character that he had the audacity to break one of the most substantial barriers that existed in our country and select a woman as his vice president,” Harris said.

“But while I may be the first woman in this office, I will not be the last,” Harris said, to applause. “Because, every little girl watching tonight sees that this is a country of possibilities. And to the children of our country, regardless of your gender, our country has sent you a clear message: Dream with ambition. Lead with conviction and see yourselves in a way that other may not, simply because they have never seen it before.” Harris then introduced President-elect Joe Biden, who jogged onto the stage, taking the podium and touting the record-breaking numbers of votes cast.

“What I must admit has surprised me: Tonight we have seen all over this nation, all cities in all parts of the country, indeed across the world, and outpouring of joy, of hope, renewed faith in tomorrow bring a better day. And I am humbled by the trust and confidence you’ve placed in me,” Biden said.

Biden spoke about his desire to be a leader who “seeks not to divide, but to unify" a nation gripped by a historic pandemic and a confluence of economic and social turmoil.

“I sought this office to restore the soul of America,” said Biden, “And to make America respected around the world again and to unite us here at home.”

Biden continued to urge unity within the country. He addressed Trump supporters, saying he understands their disappointment.

"I lost a couple of times myself," he said. "To make progress, we have to stop treating our opponents like enemies. They are not our enemies — they are Americans," he added.He declared that it is time for the country to heal. "Americans have called on us to marshal the forces of decency, fairness, science and the forces of hope in the great battles of our time," he said.

Earlier in the day after his projected election victory, Biden, in a statement, said it was time for the battered nation to set aside its differences.

"I am honored and humbled by the trust the American people have placed in me and in Vice President-elect Harris," the statement said. "In the face of unprecedented obstacles, a record number of Americans voted. Proving once again, that democracy beats deep in the heart of America. With the campaign over, it’s time to put the anger and the harsh rhetoric behind us and come together as a nation. It’s time for America to unite. And to heal. We are the United States of America. And there’s nothing we can’t do, if we do it together."

The projected victory is historic, as Biden’s running mate, Sen. Kamala Harris, will become the nation’s first Black and female vice president-elect. Biden, 77, will also become be the oldest president ever to take office and the first president from the state of Delaware.

The video footage, posted to Harris’ Twitter account, showed her congratulating Biden over the phone with a wide smile.

Biden was on track to win the national popular vote by more than 4 million, a margin that could grow as ballots continue to be counted.

Dr. Jill Biden shared an image of the two on Twitter, writing: “He will be a President for all of our families.”

As Trump refuses to concede, his campaign has countered with its own statement, calling the election “far from over.”

“We all know why Joe Biden is rushing to falsely pose as the winner, and why his media allies are trying so hard to help him: they don’t want the truth to be exposed. The simple fact is this election is far from over. Joe Biden has not been certified as the winner of any states, let alone any of the highly contested states headed for mandatory recounts, or states where our campaign has valid and legitimate legal challenges that could determine the ultimate victor. In Pennsylvania, for example, our legal observers were not permitted meaningful access to watch the counting process. Legal votes decide who is president, not the news media.

“Beginning Monday, our campaign will start prosecuting our case in court to ensure election laws are fully upheld and the rightful winner is seated. The American People are entitled to an honest election: that means counting all legal ballots, and not counting any illegal ballots. This is the only way to ensure the public has full confidence in our election. It remains shocking that the Biden campaign refuses to agree with this basic principle and wants ballots counted even if they are fraudulent, manufactured, or cast by ineligible or deceased voters. Only a party engaged in wrongdoing would unlawfully keep observers out of the count room – and then fight in court to block their access.

“So what is Biden hiding? I will not rest until the American People have the honest vote count they deserve and that Democracy demands.”

Get live updates below. Mobile users, click here to view

The news comes after delays in results from several key battleground states racing to tabulate a record amount of mail-in votes amid the coronavirus pandemic.

The race results face legal challenges in multiple states from the Trump campaign, which had already filed lawsuits in Nevada, Michigan, Pennsylvania and Georgia, though some of them were quickly dismissed by judges.

The Trump campaign has also requested a recount in Wisconsin, claiming “irregularities" in several counties.

More than 102 million people had already voted in the weeks prior to Election Day, consisting of far more Democrats than Republicans, according to U.S. Elections Project data compiled Tuesday. And many states allow mailed-in votes to be accepted after Election Day — as long as they were postmarked by Tuesday.

Mail ballots normally take more time to verify and count, and results had been expected to take longer this year because there are so many of them and the race so narrow. As a result, the country waited anxiously for days following Nov. 3 as election officials finished counting votes.

Election law experts and state election officials have overwhelmingly said there has been no sign of widespread or even sporadic voter fraud.

In other closely watched races, Trump picked up Florida, the largest of the swing states, while Biden flipped Arizona, a state that had reliably voted Republican in recent elections, according to projections by FOX News and the Associated Press.

The high stakes election was held against the backdrop of a historic pandemic that has killed more than 234,000 Americans and decimated the economy, leaving millions unemployed.

In the months leading up to the election, the candidates painted dramatically different visions for the nation’s future.

Trump campaigned in important regions across the country, holding large rallies and downplaying the threat of COVID-19. He criticized Democratic leaders who have imposed limits on gatherings to help combat the pandemic. In recent days, both the number of cases and deaths have surged in a majority of U.S. states, according to Johns Hopkins University.

Trump touted his administration’s response to the pandemic during his first term, highlighting his own recovery from COVID-19 and claiming the crisis “is going away” during the final presidential debate.

But the Biden campaign didn’t hold large, in-person rallies in the months leading up to the presidential race, opting instead for smaller, socially distanced events to signal the former vice president’s approach to the public health crisis. He pledged to work with state and local officials across the country to push mask mandates.

Biden repeatedly slammed Trump’s response to the pandemic, stating “the president has no plan.” 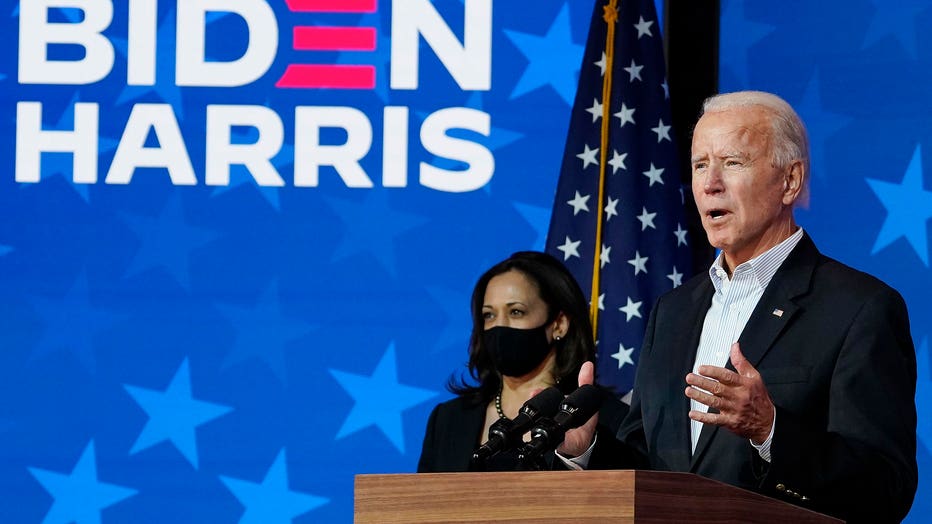 He overtook a crowded Democratic primary field, which included Harris, and ultimately won the party’s nomination for the 2020 presidential election. In August, Biden announced Harris, 55, as his running mate.

Harris, who is the daughter of immigrants from Jamaica and India, became the first African American woman on a major party ticket and the first person of Asian descent to appear on a presidential ticket.

Reaction poured in from fellow lawmakers, celebrities and voters across the country — congratulating Biden and Harris.

Former first lady Michelle Obama posted a congratulations to Biden and Harris and called on supporters to reach across the aisle in the days ahead and "connect with them on what unites us."

Former President Bill Clinton weighed in on the Biden-Harris projected victory, writing that “America has spoken and Democracy has won.” Former Republican presidential candidate and Florida Gov. Jeb Bush also tweeted well-wishes to Biden and Harris, saying, "I will be praying for you and your success."