Biden says Trump not attending inauguration is a good thing

President-elect Joe Biden said President Donald Trump skipping the inauguration is one of the few things the two have ever agreed on.

WASHINGTON - The coronavirus pandemic is about to collide with what is typically one of America’s biggest celebrations of all: the swearing-in of a new president.

While lots of details are still to be worked out - especially with heightened security surrounding the Capitol after the deadly riot earlier this month - this Jan. 20 is sure to be more subdued than prior inauguration days.

Here are answers to some of the most-asked questions about America’s 59th Inauguration Day, when president-elect Joe Biden and vice president-elect Kamala Harris will be sworn in.

What is Inauguration Day?

Inauguration Day is the date in which a president and vice president mark the beginning of a new term, as outlined in the 20th Amendment.

Initially, the Constitution put Inauguration Day on March 4. But having a long lame-duck period proved detrimental to the nation during Abraham Lincoln’s first term in 1861 and Franklin Roosevelt’s first term in 1933.

The four-month gap, along with delayed congressional activity, left major crises like southern secession and the Great Depression unaddressed for prolonged periods.

So in 1933, Congress adopted the 20th Amendment to shorten the lame-duck period, establish Jan. 20 as Inauguration Day and set Jan. 3 as the beginning of a new congressional term.

In years Jan. 20 falls on a Sunday, the oath of office is administered privately, then again the next day in a public ceremony, according to the Library of Congress. This happened in 1957, 1985 and 2013.

A ceremony is held at the Capitol where the incoming president and vice president are sworn in and address the nation for the first time as heads of the Executive Branch. Incumbent presidents who’ve won re-election would also be sworn in again and deliver a speech.

When is Inauguration Day 2021? 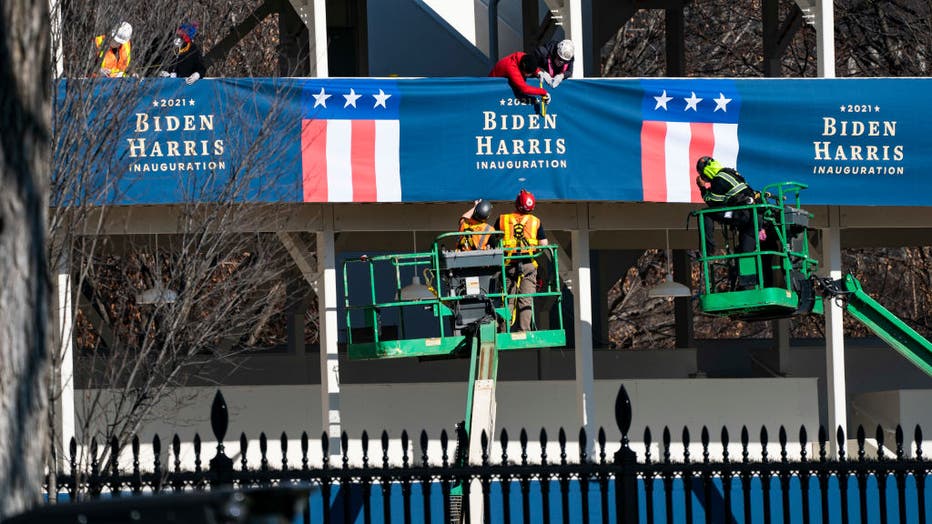 Workers hang banners for President-wlect Biden and Vice President-elect Kamala Harris ahead of the inauguration on a press riser just outside the north gate at the White House on Thursday, Jan. 14, 2021 in Washington, DC. (Photo by Jabin Botsford/The

Chief Justice John Roberts will administer the oath of office to Biden and Associate Justice Sonia Sotomayor will swear in Harris.

What is the inauguration schedule?

The Presidential Inaugural Committee has not given specific times for any of the events on Inauguration Day yet, except to say a primetime special will air at 8:30 p.m. ET.

We do know the day will start with the inaugural ceremony, where president-elect Joe Biden and vice president-elect Kamala Harris will be sworn in. Lady Gaga will begin the ceremony by singing the national anthem.

The inaugural ceremony will include prayer from Father Leo J. O’Donovan, the Pledge of Allegiance from Andrea Hall, poetry from Amanda Gorman, a musical performance by Jennifer Lopez and a benediction by Rev. Dr. Silvester Beaman. Biden will also deliver his inaugural address.

After the ceremony, Biden, Harris, first lady Dr. Jill Biden and the second gentleman Douglas Emhoff will take part in the Pass in Review on the East Front, a long-standing military tradition symbolizing the peaceful transfer of power to a new Commander-in-Chief.

They will all then visit the Tomb of the Unknown Soldier at Arlington National Cemetery to lay a wreath. Former presidents Barack Obama, George W. Bush and Bill Clinton — along with the former first ladies — will join the Bidens.

Biden will then receive the traditional Presidential Escort to the White House. In the past, citizens have lined the streets of Washington to get a glimpse of the passing convoy but the COVID-19 pandemic has rendered large gatherings unsafe.

Instead, organizers are planning a virtual "Parade Across America," which will televise "diverse, dynamic performances in communities across the country."

Later in the evening, Tom Hanks will host the "Celebrating America Primetime Special." Scheduled for 8:30 p.m. ET, the television special aims to emphasize the strength of the U.S. democracy through performances by Demi Lovato, Justin Timberlake, Ant Clemons and Jon Bon Jovi.

Biden and Harris are also scheduled to speak.

The special will air and stream live on multiple channels, including NewsNOW from FOX.

What time is the inauguration?

All inaugural ceremonies make an effort to have the president-elect take the oath of office at noon on Jan. 20, which marks the constitutional end of the previous term.

However, the Presidential Inaugural Committee has not given a specific time yet for the inaugural ceremony where president-elect Joe Biden and vice president-elect Kamala Harris will be sworn in.