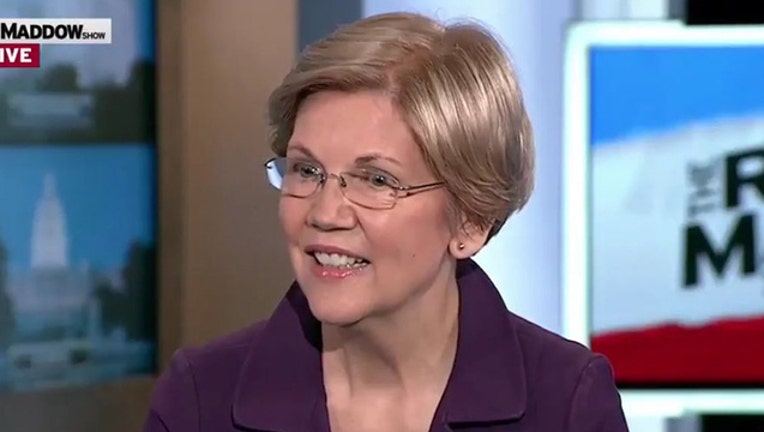 "I am ready to get in this fight and work my heart out for Hillary Clinton to become the next president of the United States and to make sure that Donald Trump never gets anyplace close to the White House," the Massachusetts senator said on MSNBC's "The Rachel Maddow Show."

Warren was the only holdout among the Senate's Democratic women and, given her stature among liberals, her endorsement could be an important boost for Clinton. She also is being floated as a potential vice presidential pick for Clinton.

Ahead of her endorsement Thursday, Warren spoke to the American Constitution Society and attacked Trump as a "loud, nasty, thin-skinned fraud."

Trump "has never risked anything for anyone and serves nobody but himself. And that is just one of the many reasons why he will never be president," Warren said in the scathing broadside also aimed at the top two Republicans in Congress.

The liberal lawmaker increasingly has tangled with Trump, taking on an attack-dog role that she seems able to execute more effectively than other Democrats, including Clinton herself. Trump has lashed back, labeling her "Goofy Elizabeth Warren" and ridiculing her claims to Native American heritage.

Warren took aim at Trump's contention that U.S. District Judge Gonzalo Curiel can't preside fairly over a case involving Trump University because the U.S.-born Curiel is of Mexican descent and Trump wants to build a wall along the border with Mexico.

Senate Majority Leader Mitch McConnell, R-Ky., and House Speaker Paul Ryan, R-Wis., both have strongly condemned those comments, but Warren, D-Mass., argued that McConnell and Ryan are really no better than Trump on the issue of judges. She cited what she contends is McConnell's blockade of Obama's judicial nominees and Ryan's acquiescence in the strategy.

"Paul Ryan and Mitch McConnell want Donald Trump to appoint the next generation of judges. They want those judges to tilt the law to favor big business and billionaires like Trump. They just want Donald to quit being so vulgar and obvious about it," Warren said.

"Donald Trump chose racism as his weapon, but his aim is exactly the same as the rest of the Republicans. Pound the courts into submission to the rich and powerful."

McConnell's office pushed back against Warren's criticism. Spokesman Don Stewart said, "If Sen. Warren held her current beliefs about ensuring votes for all nominees when her party was engaged in serial and unprecedented filibusters against women and minorities during the Bush administration, she kept them to herself."