Some countries allowing Americans to visit this summer

As the rate of COVID-19 vaccinations spreads across the globe, some countries have begun opening their borders to international travelers.

WASHINGTON - The United States extended restrictions for non-essential travel at land and ferry borders with Canada and Mexico through July 21, officials said.

The Department of Homeland Security announced the extension Sunday in an ongoing effort to reduce the spread of COVID-19 "while ensuring access for essential trade and travel." The restrictions had been set to expire Monday.

In a statement, DHS also noted "positive developments in recent weeks" and said it is "participating with other U.S. agencies in the White House’s expert working groups with Canada and Mexico to identify the conditions under which restrictions may be eased safely and sustainably."

On Friday, Canada also announced an extension on border restrictions with the U.S. through the same date as the country works to get a higher percentage of Canadians fully vaccinated. Canada Public Safety Minister Bill Blair said the move has been made in coordination with the U.S.

There have been growing calls in the U.S. to open the Canada-U.S. border for tourism but less than 20% of Canadians are fully vaccinated. 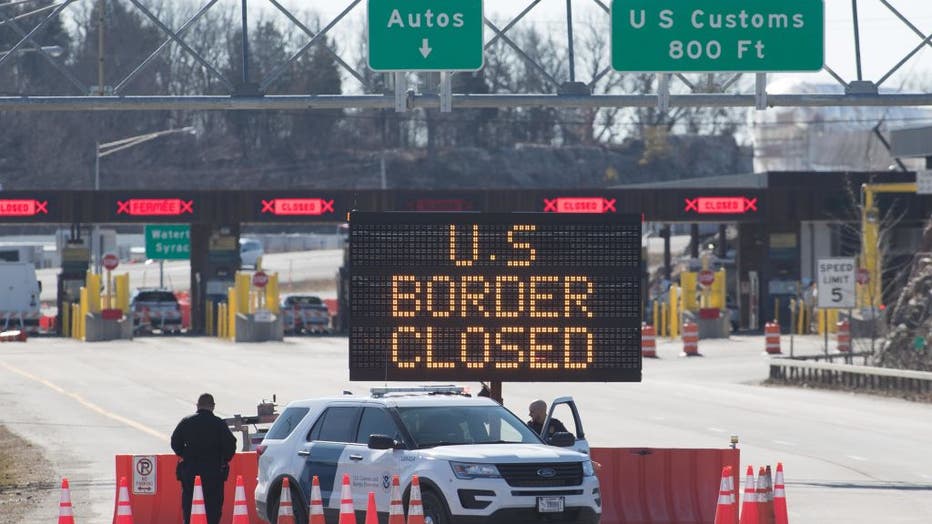 FILE - U.S. Customs officers stand beside a sign saying that the border is closed at the US/Canada border in Lansdowne, Ontario, on March 22, 2020. (Photo by LARS HAGBERG/AFP via Getty Images)

"We’re still seeing cases across the country and we want to get them down," Prime Minister Justin Trudeau said. "At the same time, we also know we have to hit our targets of 75% vaccinated with the first dose and at least 20% vaccinated with the second dose before we can start loosening things up because even a fully vaccinated individual can pass on COVID-19 to someone who is not vaccinated."

The ban on nonessential travel across the United States’ northern and southern border was announced in March 2020 and has been extended every month since.

Trudeau said the government plans to have Canadians upload proof of vaccination pictures to an app so border agents can verify someone is fully vaccinated when traveling this summer.

Two U.S. members of Congress who co-chair the Canada-U.S. Interparliamentary Group criticized the extension. Western New York Democrat Brian Higgins and Michigan Republican Bill Huizenga decried the lack of transparency around the border talks between Canada and the U.S. as a disservice to residents on both sides of the border who are waiting to see loved ones and renew business ties.

Perrin Beatty, president of the Canadian Chamber of Commerce, said the policy should be based on whether a traveler is vaccinated, not on nationality. He noted France now allows Canadians and Americans to visit, which makes it easier to travel abroad than within this country and to our closest neighbor.

"What the government is doing flies in the face of science, of economics and good public policy," Beatty said.

Mexico allows U.S. travelers by air and does not require a negative COVID-19 PCR test upon arrival. The U.S. Centers for Disease Control and Prevention recommends delaying any international travel until the individual is fully vaccinated.

All travelers returning to the U.S. — including those who are fully vaccinated — are required to show proof of a negative COVID-19 test no more than three days before arrival. They can also show documentation of recovery from COVID-19 in the past three months.

Meanwhile, the European Union agreed last week to start lifting restrictions on American tourists. EU members agreed on June 16 to add the U.S. to the list of countries for which they should gradually remove restrictions on non-essential travel. The move was adopted during a meeting in Brussels of permanent representatives to the bloc.