In this week’s Trackdown, Dallas police have asked FOX 4's Shaun Rabb and the public to help find the killer of a 22-year-old man who came to the defense of a woman who was being assaulted.

DALLAS - In this week’s Trackdown, Dallas police have asked FOX 4's Shaun Rabb and the public to help find the killer of a 22-year-old man who came to the defense of a woman who was being assaulted.

Police said Jorge Saenz lost his life trying to defend a woman, and now Dallas homicide Det. Esteban Montenegro hopes someone can tell him where the killer is hiding.

"What Jorge did, anybody could have done, gone to the aid of this female, and it’s tragic that somebody is going to pull a knife or a gun at a simple fist fight," the detective said.

Two women were brawling in the parking lot of the Tepa bar and grill at the corner of South Hampton and 12th streets.

It was caught on video with a cell phone.

"A male intervened in that fight and began assaulting one of the females. At that point, Jorge Saenz intervened and he defended that girl," Det. Montenegro explained.

The men started going at it, and Montenegro said Saenz had the upper hand.

"He was getting the best of that individual. At that point, Juan Bravo came from behind, took out a gun with a red laser, pointed it at Jorge, and cowardly shot him," the detective said.

The 22-year-old victim ran about a block, before dropping dead.

Juan Bravo was in a red Texas Rangers jersey. 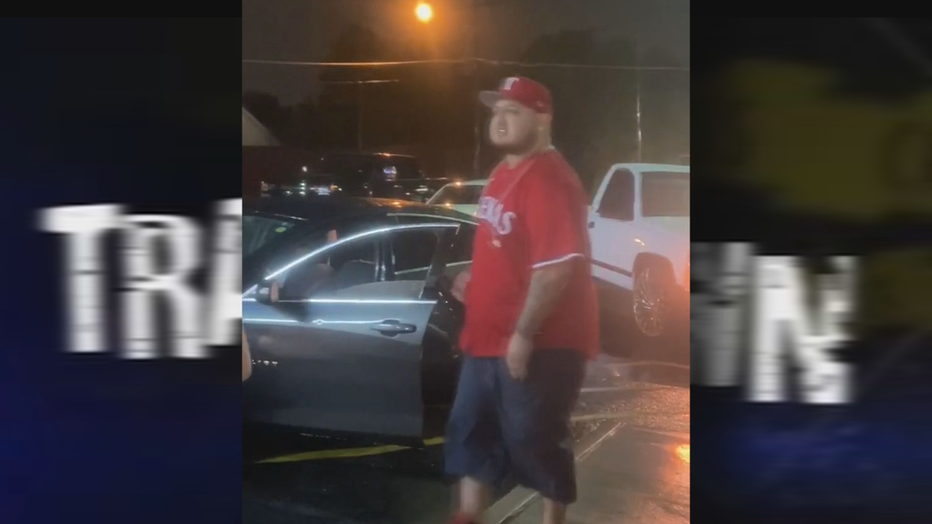 Investigators aren’t sure if Bravo knew the victim beforehand, or if he was with someone involved in the fight.

"I need the public, if they know where Juan Bravo is, his whereabouts, to contact the local police, the U.S. Marshals, or me directly," Montenegro said. "It’s been six months now since Juan Bravo has been evading the authorities, and we need to put closure and give this family some closure so they can go on with their lives."

U.S. Marshals are searching for Bravo as well, and Crime Stoppers is offering a $5,000 reward for information.

Anyone with information is asked to call DPD Det. Esteban Montenegro on his cell phone at 214-283-4801.