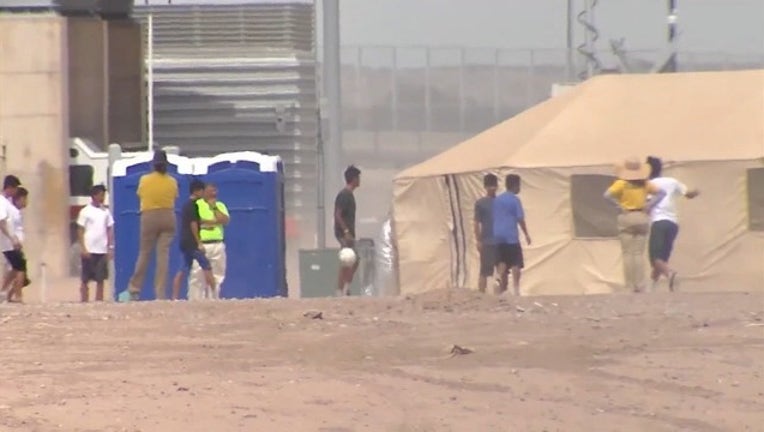 TORNILLO, Texas (AP) - The Trump administration announced in June it would open a temporary shelter for up to 360 migrant children in this isolated corner of the Texas desert. Less than six months later, the facility has expanded into a detention camp holding thousands of teenagers - and it shows every sign of becoming more permanent.

By Tuesday, 2,324 largely Central American boys and girls between the ages of 13 and 17 were sleeping inside the highly guarded facility in rows of bunk beds in canvas tents, some of which once housed first responders to Hurricane Harvey. More than 1,300 teens have arrived since the end of October.

Rising from the cotton fields and dusty roads not far from the fence marking the border between the U.S. and Mexico, the camp has rows of beige tents and golf carts that ferry staffers carrying walkie-talkies. Teens with identical haircuts and government-issued shirts and pants can be seen walking single file from tent to tent, flanked by staff at the front and back.

More people are detained in Tornillo's tent city than in all but one of the nation's 204 federal prisons, and construction continues.

None of the 2,100 staff are going through rigorous FBI fingerprint background checks, according to a government watchdog memo published Tuesday. "Instead, Tornillo is using checks conducted by a private contractor that has access to less comprehensive data, thereby heightening the risk that an individual with a criminal history could have direct access to children," the memo says.

Federal plans to close Tornillo by Dec. 31 may be impossible to meet. There aren't 2,300 extra beds in other facilities, and a contract obtained by the AP shows the project could continue into 2020. Planned closures have already been extended three times since this summer.

The teens at Tornillo were not separated from their families at the border. Almost all came on their own hoping to join family members in the United States.

The camp's population may grow even more if migrants in the caravans castigated by President Donald Trump enter the U.S. Federal officials have said they may fly caravan teens who arrive in San Diego directly to El Paso, then bus them to Tornillo, according to a nonprofit social service provider who spoke on the condition of anonymity because he was not allowed to publicly discuss the matter.

As the population inside the camp swells, young detainees' anguish has deepened.

"The few times they let me call my mom I would tell her that one day I would be free, but really I felt like I would be there for the rest of my life," a 17-year-old from Honduras who was held at Tornillo earlier this year told AP. "I feel so bad for the kids who are still there. What if they have to spend Christmas there? They need a hug, and nobody is allowed to hug there."

He spoke on condition of anonymity for fear of reprisal from immigration authorities.

The nonprofit agency contracted to run Tornillo says it is proud of its work. It says it is operating the facility with the same precision and care used for shelters put up after natural disasters.

"We don't have anything to hide. This is an exceptionally run operation," said Krista Piferrer, a spokeswoman for BCFS Health and Human Services, a faith-based organization.

A spokesman for the U.S. Department of Health and Human Services, Mark Weber, said no decisions have been made about whether Tornillo will close by year's end as scheduled.

"Whatever it is we decide to do, in the very near future, we'll do a public notice about that," he said.

In June, as detention centers for migrant children overflowed, Scott Lloyd, director of HHS's Office of Refugee Resettlement, signed a memo granting a waiver to staff up Tornillo without the required child abuse and neglect checks, which flag any potential employee who has a record of hurting a child. There were two reasons, according to a memo by HHS's inspector general's office: first, there was pressure to move quickly to open the detention camp, and second, Lloyd's agency assumed Tornillo staff had already undergone FBI fingerprint checks. They had not.

Lloyd, under fire for his handling of the migrant crisis, was transferred out of the refugee resettlement branch and to a different division of HHS last week. Weber did not immediately respond to questions as to why the department waived background checks.

Failing to properly check staffers' backgrounds "can lead to potential abuse and neglect of these kids," said Dr. Colleen Kraft, president of the American Academy of Pediatrics.

BCFS has filed more than 30 reports on "significant incidents" at Tornillo since June, some involving interactions between children and staff, but none of a sexual nature, Piferrer said.

Jeffrey Harp, a retired FBI assistant special agent in charge, told the AP that FBI fingerprint background checks can be completed in a few minutes and reveal much more information about job candidates than checks that simply run a person's name against criminal history databases.

"How do you know the person is who they say they are unless you do a fingerprint check? They can't lie about their fingerprints, but they can lie about their name or take on someone else's identity who has a crystal clean record," Harp said.