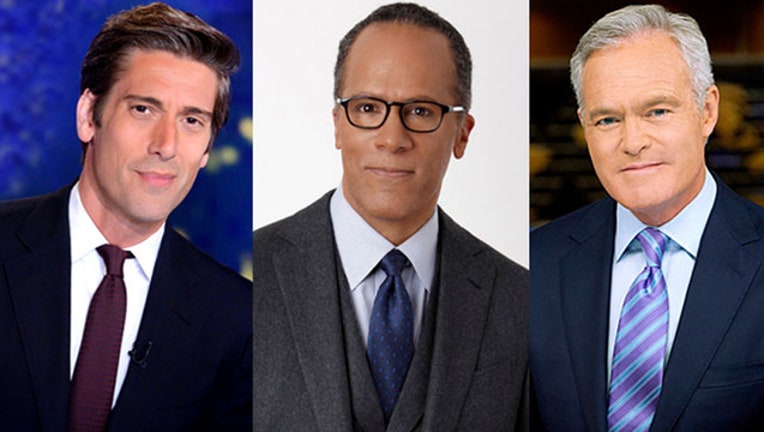 NEW YORK (AP) - The Trump administration has been a boon for the cable news networks each night yet curiously not for the broadcast evening news programs, where a viewership slump contributed to Scott Pelley losing his job last week as anchor of the "CBS Evening News."

CNN, Fox News Channel and MSNBC spend much of their prime-time hours dissecting President Donald Trump's every move and people on all sides of the political spectrum can't seem to get enough. Ratings are up at all three networks, doubling since last May for MSNBC. They're uniquely situated to appeal to the passionate believers in a country that came out of the last election sharply divided.

"When people are on fire, the cable people gain compared to the evening news, which doesn't play that game," said Tom Bettag, longtime "Nightline" producer who now teaches journalism at the University of Maryland.

Even with the same material to cover, the ABC, CBS and NBC nightly wraps were down a collective 4 percent in viewership for the season that ended last month, the Nielsen company said. That fits a typical pattern, where news ratings generally rise during an exciting election year and fall when a new president becomes immersed in the day-to-day grind of governing. A similar trend is visible in the morning, where ABC's "Good Morning America" and NBC's "Today" show are trying to stop viewers from bleeding away.

To the broadcast networks, it isn't necessarily fair to compare the different trajectories since the missions aren't the same. The evening news shows, an institution in place since the middle of the last century, are designed to present a half-hour, nonbiased report on the day's news for a broad audience. The cable networks can respond to viewers' interest with an unlimited amount of time.

The three telecasts are seen by just under 24 million viewers each evening, still a formidable reach. Even in third place, Pelley was typically seen by twice as many people each night as MSNBC's Rachel Maddow, the brightest star in cable news.

ABC's "World News Tonight" has essentially erased the ratings lead of NBC's "Nightly News" in the past year to the point where the two run neck-and-neck at the top of the ratings. The 6 percent dip in Pelley's ratings, larger than the other two, contributed to his downfall.

With Trump usually the day's biggest story, the broadcasters often don't offer enough to satisfy people who burn with interest and too much to people who are sick of him, said news consultant Andrew Tyndall.

"If you're not interested in that, it's pretty dense stuff," he said.

If you are, it's a sea of riches. The news networks even benefit from a newspaper war; a stream of exclusive stories posted in the early evening by The Washington Post and The New York Times in recent weeks have given them fodder for hours of talk. They usually come out too late to significantly impact the broadcast outlets.

Tyndall, whose company studies the content of newscasts, said he believes that the broadcast newscasts lack or don't effectively use people who are good at explaining what day-to-day stories mean, something the late Tim Russert once excelled at for NBC News.

Maddow effectively fills this role at MSNBC, he said.

"You have to take your hat off to Maddow," he said. "She was someone who was in position to take advantage of this. When the need to explain things came, she already had her staff in place and the format to be able to do that."

Fox News had record ratings during the first two months of Trump's administration, and is often the most-watched network in all of cable television. Fox is still No. 1 in cable news, but has faded recently with the firing of Bill O'Reilly and stories that are depressing to its majority pro-Trump audience. Its prime-time audience in May was up 11 percent over 2016, Nielsen said.

It's easy to sense the enthusiasm among the politically involved, the feeling that if you go a couple of hours away from the news "you're going to miss it and you have to get back to the television set," said Andrew Heyward, former CBS News president.

The cable networks essentially offer politics, and Trump, as entertainment. There are hours of colorful byplay by intelligent analysts. Other news is largely ignored, except for a breaking story about a terrorist attack. A political event - a White House briefing, an announcement, a rally - gets full coverage. It's a big wave, and the cable networks are designed to surf it. Most pointedly at Fox and MSNBC, the news is given a spin designed to appeal to partisans.

"People who want passion along with the politics are not really going to find that on the (broadcast network) evening newscasts," Heyward said.