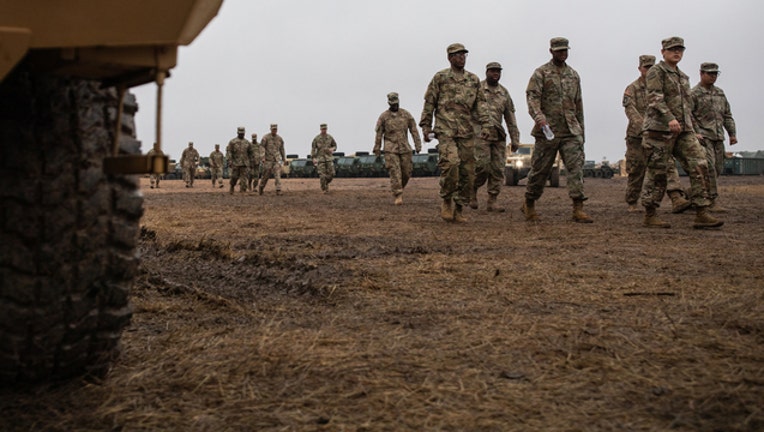 U.S. Army soldiers walk toward the mess tent where troops deployed to the U.S.-Mexico border enjoy a Thanksgiving meal on a base near the Donna-Rio Bravo International Bridge on November 22, 2018 in Donna, Texas. (Photo by Tamir Kalifa/Getty Images)

WASHINGTON (AP) - The Pentagon said Sunday it will send 3,750 more troops to the U.S.-Mexico border to put up another 150 miles of concertina wire and provide other support for Customs and Border Protection.

The additions will bring the total number of active-duty troops on the border to 4,350.

The announcement is in line with what Acting Defense Secretary Pat Shanahan had said on Tuesday when he provided estimates for the next phase of a military mission that has grown in size and length. Critics have derided it as a political ploy by the White House as President Donald Trump seeks billions to build a border wall.

Shanahan said on Tuesday that several thousand more troops would be sent mainly to install additional wire barriers and provide a large new system of mobile surveillance and monitoring of the border area. Sunday's announcement said the mobile surveillance mission would last through Sept. 30.

Members of Congress have question whether the border mission is distracting troops from their main work of fighting extremists abroad and training for combat. The first active-duty troops were sent to the border on about Oct. 30 for a mission that was to end Dec. 15. It has since been extended twice.

"What impact does it have to readiness to send several thousand troops down to the Southern border? It interrupts their training. It interrupts their dwell time," Rep. Adam Smith, D-Wash., chairman of the House Armed Services Committee said at a hearing on Tuesday.

Vice Adm. Mike Gilday, the director of operations for the Joint Staff, told the panel that he does not believe military readiness has been significantly affected. He said some units have missed training opportunities because of the deployment and others have seen less time at home between deployments than the military likes to provide.

But he said there is an effort to rotate service members in and out of the mission every six to eight weeks in order to minimize any impact.