Olympics stars in Fort Worth this week for NCAA Gymnastics Championships.

Some of the biggest names in gymnastics, including U.S. Olympic gold medalists, are at Dickies Arena in Fort Worth for the next three days. They are competing in the NCAA Gymnastics Championships.

FORT WORTH, Texas - Some of the biggest names in gymnastics, including U.S. Olympic gold medalists, are at Dickies Arena in Fort Worth for the next three days. They are competing in the NCAA Gymnastics Championships.

The NCAA Women's Gymnastics Championship is back in Fort Worth this year. But after being canceled in 2020 and last year’s crowd capacity limited to 25%, some fans haven’t attended in years.

2022 marks the event’s first time in Dickie’s Arena at full capacity with families and friends from around the country finally able to watch the action in person.

"It’s so exciting and thrilling just to see all of the OU gymnasts and the other girls just compete, and it’s just thrilling being here," said Addisyn Snow, a high school sophomore from Oklahoma. 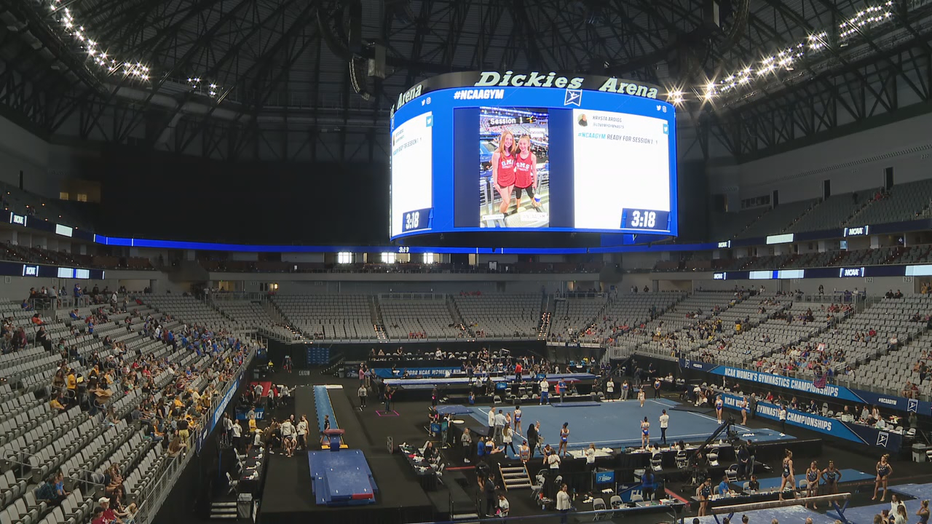 In 2021, the NCAA adopted a new rule allowing Olympic athletes to both accept endorsement deals and compete on the collegiate level.

Four Olympians are competing in Fort Worth this week.

"Especially since there’s so many Olympians this year in college, it’s so exciting to watch," said high school freshman Maggie Ball.

Yet amidst several canceled and delayed events, the arena has still managed to host NCAA Basketball, the National Lacrosse league, the WWE and the Fort Worth Rodeo.

"The sporting events we’ve been able to bring in just this last year equated to over $100 million of economic impact for our community," said Fort Worth Sports Commission Executive Director Jason Sands. "This arena has opened up so many opportunities for our city to showcase what we have."

Four teams will hit the floor on Saturday. One of them will become the NCAA Gymnastics Champion.