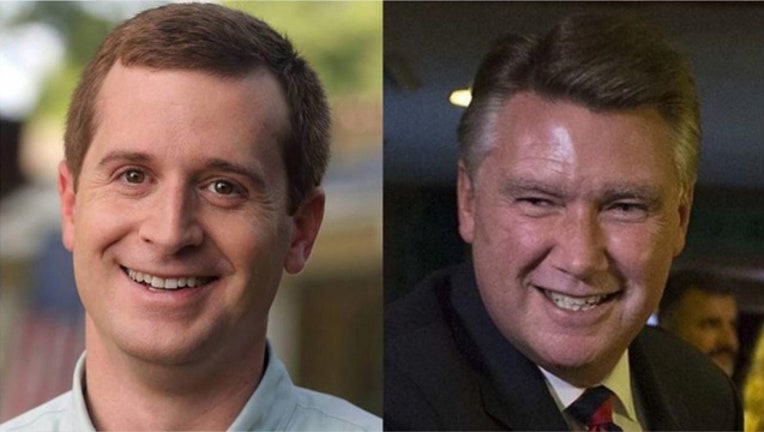 Amid the developments, U.S. House Democratic Leader Nancy Pelosi said the House "retains the right to decide who is seated" and could take the "extraordinary step" of calling for a new election if the winner isn't clear.

Unofficial totals have Republican Mark Harris leading Democrat Dan McCready by 905 votes. But the state elections board refused to certify the results last week because of allegations of "irregularities and concerted fraudulent activities" involving mail-in ballots in the district. The board is meeting later this month to hear evidence, but it's unclear whether the race will be settled then.

North Carolina GOP Executive Director Dallas Woodhouse texted a statement to The Associated Press saying that the GOP would back a new election if the state's elections board were to show that absentee ballot issues changed the outcome of the 9th Congressional District race.

"If they can show a substantial likelihood it could have changed the race then we fully would support a new election," he said.

However, he said that if the investigation shows that the outcome would not have been changed, Republican candidate Harris should be certified the winner.

Entertaining the idea of a new election represents a significant change from last Thursday, when state GOP Chairman Robin Hayes issued a statement saying: "Democrats are throwing everything, including the kitchen sink, at the wall to try and steal an election." On Sunday, Hayes said there weren't enough questioned ballots to change the race's outcome, and the next day he accused a Democratic member of the state board of "score-settling."

At issue is who can handle completed ballots. North Carolina law allows only a family member or legal guardian to drop off absentee ballots for a voter.

In affidavits offered by the state Democratic Party, some Bladen County voters have described that people came to their homes to collect their absentee ballots, whether or not they had been fully completed or sealed in an envelope to keep them from being altered.

The revelations and ensuing national news coverage have put pressure on Republicans and attracted attention from top Democrats.

Pelosi, who's nominated to become House speaker when Democrats take control in January, said Thursday that "any member-elect can object to the seating and the swearing-in of another member elect." She also noted the investigative power of the House to determine race winners.

It's "bigger than that one seat," she said, pointing to the overall "integrity of elections."

A state election board spokesman confirmed Thursday that subpoenas seeking documents had been sent to the Harris campaign, the firm serving as Harris' chief strategist and the campaign committee of the sitting Bladen sheriff. The board released documents showing that McCrae Dowless, a contractor hired by the firm, seems to have collected the most absentee ballot request forms in Bladen County this fall.

In North Carolina, several state Senate Republicans whose districts overlap the 9th called for further scrutiny of voting irregularities going back to 2010 and urged Democratic Gov. Roy Cooper to create a bipartisan task force - separate from the state elections board - to investigate irregularities beyond this year's election.

They point to unusual outcomes in the mail-in ballot totals in previous elections that appeared to benefit Democrats or Republicans, depending on the race and the year. They said neither election boards appointed by under governors from both parties, nor prosecutors, have adequately addressed recurring issues in Bladen.

"What we cannot have going forward from this point is an investigative and enforcement effort or process that has a partisan taint that could dramatically worsen the situation," said Sen. Dan Bishop, a Charlotte Republican. But he and his colleagues were cautious about saying whether a new election is necessary.

"If there are not enough votes to overturn the election, then we probably need to go ahead and certify," said Sen. Tommy Tucker of Union County. "If we find the irregularities and the vote count being where it is, then (a new election) certainly is an option."