The crowd in Mansfield was definitely smaller because of the stormy weather. But the die-hards who were there say they weren't bothered.

The game started Thursday under a light rain that just got heavier as the night went on. There were two 30-minute delays after lightning was spotted nearby.

As the rain moved across the Metroplex, a few dedicated Thursday night high school football fans pulled out their ponchos to watch the DeSoto Eagles take on the Mansfield Summit Jaguars.

Suzanne and Robert Riter cheered on their son under a small sea of umbrellas mostly made up of loyal family members. But for the most part, the bleachers were nearly empty while rain pounded the field. 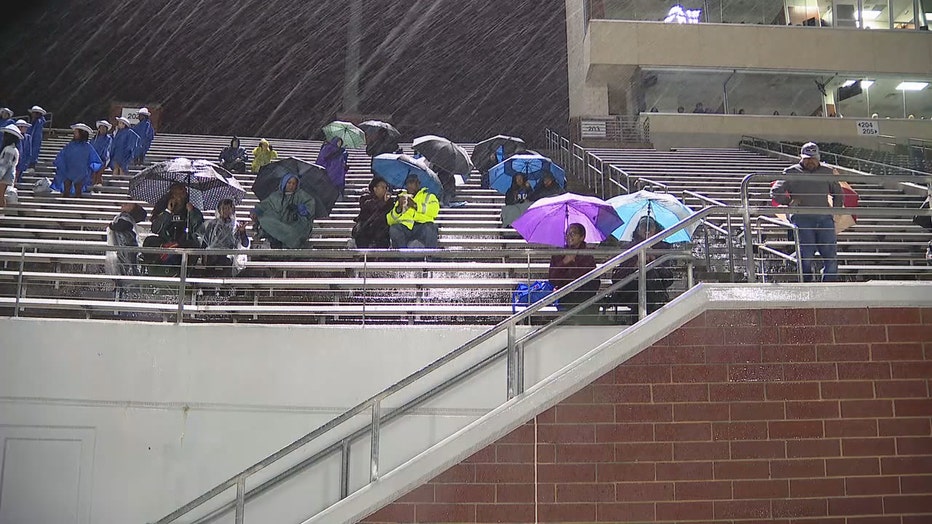 Cheerleaders traded skirts for leggings Thursday night, and a handful of excited teens brought the energy to the student section.

“I’m excited to cheer on my team,” said student Harrison Chrane. “I’ve got the most school spirit. No matter rain or shine, I’m here for my team, my boys.”

But just before halftime, a nearby lightning strike pushed the game into delay. The stands were cleared. Fans and parents were sent back to their cars to wait out the weather After roughly 35 minutes, players returned to field and were eager to finish the game.

The teams resumed the game and made it to the third quarter. But with six minutes left until the fourth quarter, the game was put on hold once again due to lightning.