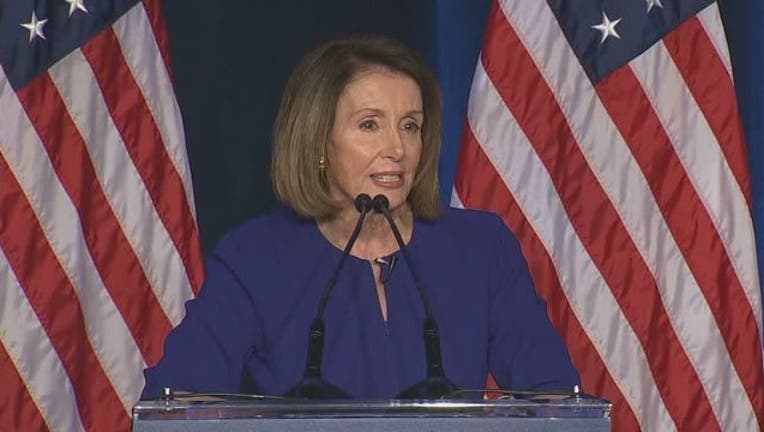 WASHINGTON (AP) - In a high-stakes case of dare and double-dare, House Speaker Nancy Pelosi served notice that President Donald Trump won't be allowed to deliver his State of the Union address to a joint session of Congress on Tuesday after the president said he was aiming to show up even though he was not welcome.

Pelosi told Trump on Wednesday that the House won't approve a resolution allowing him to come until the government reopens.

"That's a great blotch on the incredible country that we all love," Trump shot back, calling it a "very, very negative part of history."

Pelosi's snub confronted Trump with the need to find another way to put his views to the nation — one lacking the spectacle and history afforded by a State of the Union speech in the House chamber, the traditional venue.

"We'll do something in the alternative," he said, while branding Democrats "radicalized."

It was the latest round of brinkmanship between the president and Pelosi as they remain locked in an increasingly personal standoff over Trump's demand for border wall money that has forced a partial government shutdown, now in its second month.

Pelosi asked Trump last week to make other plans but stopped short of denying him the chamber for his address. She issued that denial Wednesday after Trump told her he wanted to go ahead with it — in essence, calling her bluff.

In a letter to Pelosi earlier Wednesday, Trump dismissed her previous suggestion that the speech be postponed or delivered in writing due to security issues related to the partial government shutdown. Declaring there are "no security concerns," Trump said he planned to fulfill his "Constitutional duty" to report to Congress on the state of the union.

"It would be so very sad for our Country if the State of the Union were not delivered on time, on schedule, and very importantly, on location," Trump's letter said.

But Pelosi made her decision final not long after. She told him the House "will not consider a concurrent resolution authorizing the President's State of the Union address in the House Chamber until government has opened."

The president cannot speak in front of a joint session of Congress without both chambers' explicit permission. A resolution needs to be approved by both chambers specifying the date and time for receiving an address from the president.

White House officials have been working on a backup plan to have him give the speech somewhere else if Democrats blocked access to the House chamber.

Trump aide Kellyanne Conway said before Pelosi's letter was released that it would be "remarkably petty" for the speaker to deny Trump the location.

Each side has been accusing the other of pettiness since Pelosi raised doubts about the speech and Trump followed up by revoking her use of a military aircraft, thereby canceling a congressional delegation visit to Afghanistan.

Trump said the Homeland Security Department and the Secret Service assured him there would be "absolutely no problem regarding security" for the State of the Union and "they have since confirmed this publicly."

Officials have been considering alternative venues for the speech, including a rally-style event, an Oval Office address, a speech in the Senate chamber, and even a visit to the Mexican border. Multiple versions of the speech were being drafted to suit the final venue.

The Constitution states only that the president "shall from time to time give to the Congress Information of the State of the Union," meaning the president can speak anywhere he chooses or give his update in writing.

But a joint address in the House chamber, in front of lawmakers from both parties, the Supreme Court justices and invited guests, provides the kind of grand backdrop that is hard to mimic and that this president, especially, enjoys.

Still, North Carolina's House speaker, Tim Moore, invited Trump to deliver the speech in the North Carolina House chamber. Michigan House Speaker Lee Chatfield has offered his state capitol. Trump spoke with both of them this week, according to Moore's office and a tweet from Chatfield.