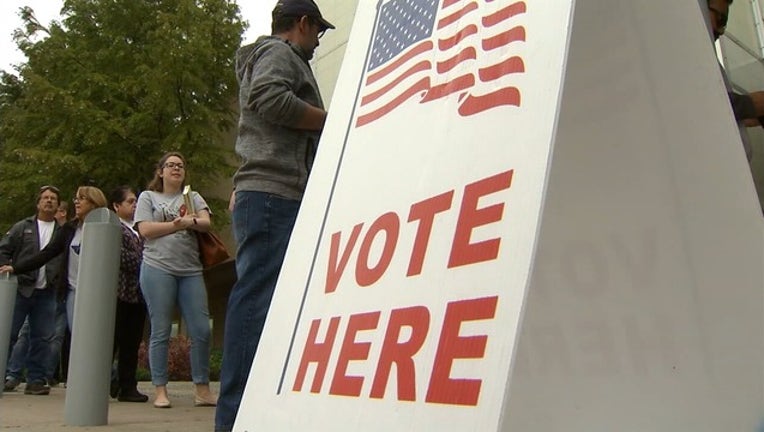 ATLANTA (AP) - Less than two weeks before Election Day, early voting returns forecast a midterm election turnout not seen in decades, with Republicans and Democrats demonstrating engaged bases on each end of the political spectrum.

That level of enthusiasm - turnout is well ahead of the 2014 pace - makes it difficult to predict final outcomes on Nov. 6, as Republicans try to defend their Capitol Hill majorities, while Democrats try to upend the all-GOP government and narrow GOP advantages in statehouses.

Still, the numbers affirm what is already known about the Donald Trump era: It's intense.

Here are some key points and highlights:

Returns, a combination of mail and in-person voting, compiled by The Associated Press show more than 15 million votes cast in 38 states by the end of Friday.

There were 28 million early ballots cast four years ago out of a total 83 million. Many states have more than doubled what turnout was at this point in 2014, and a handful already have surpassed their overall early turnout for that election.

Midterms always see a drop from the previous presidential year vote, but 2014 was a particularly lousy turnout year, with the 83 million accounting for about 36 percent of the eligible voting population. In 2016, 137.5 million people voted. That was a raw vote total record, but still a few percentage points lower in turnout than the 2008 election.

Some forecasters are predicting turnout could end up approaching 50 percent, levels not reached since the midterms between 1962-1970 - years, perhaps not coincidentally, that spanned a political turbulent era.

The Virginia statewide elections last year (the state's odd-year elections are often used as a benchmark heading into midterms) set records for absentee ballot requests and ultimately had the highest turnout seen in two decades. That was driven by both bases, but Democrat Ralph Northam ended up winning the governor's race by 9 percentage points, a margin several points wider than what polls had suggested.

It's not as simple as saying who's out-voting whom. Many states don't require party registration. Some states have shifted politically over time and some voters may not have shifted with it. For example, a 70-year-old white Democrat in the Florida panhandle - a region that resembles the rest of the culturally Deep South - or in rural North Carolina might still be registered as a Democrat but have long moved toward Republicans in federal and statewide elections.

With that caveat, returns compiled by AP through midweek showed registered Democrats casting 40.2 percent of the ballots in states with party registration, with Republicans responsible for 37.3 percent.

Yet in some key states, Republicans have an advantage. Republicans were outvoting Democrats in Senate battlegrounds including Arizona (43.9-32.9) and Florida (42.7-39.7).

It's not accurate to say there is no value in convincing an Election Day voter to vote early, since get-out-the-vote resources can be concentrated on those who haven't voted. But the real payoff for early voting is banking votes from low-propensity voters - those who help drive up presidential turnout but typically sit out other elections.

For example, in Georgia, where early turnout is almost triple what it was at this point four years ago, Democrats' internal analysis points to about 30 percent of the electorate so far being non-2014 voters. About half of those, they estimate, are non-white voters - presumably a boon for Democratic governor candidate Stacey Abrams.

That tracks with the Virginia electorate that turned out in 2017.

Democrats' analysis in Florida puts the non-2014 at about 30 percent. Democratic strategist Steve Schale's analysis has Democrats accounting for about 4 percent more of those ballots (at this point, he estimates that's about 30,000 votes; Republican Rick won in 2014 by 65,000 votes).

Republicans rightly note, however, that they stand to benefit from the "new" voter phenomenon because of Trump. It's well documented that the president drew irregular voters to the polls in 2016. By definition, those voters are still counted as low-propensity midterm voters, and they've certainly been targeted by the Republican National Committee's voter-turnout effort.

In fact, the GOP continues adding to that effort with every Trump rally. The president's regular events - with several more scheduled ahead of Nov. 6 - are ticketed online, and every attendee's contact information is added to the national GOP's voter file. Party officials say anyone identified as a potential new voter is contacted personally by phone or with an in-person visit within days.

Florida has a tight governor's race between Democrat Andrew Gillum and Republican Ron DeSantis and a Senate race that will help determine whether Republicans can expand their narrow 51-49 majority if Scott, the sitting governor, can knock off incumbent Sen. Bill Nelson.

Republicans hold the raw lead in Florida so far (about 3 points), and they have a better return rate for absentee ballots requested. That's a clear sign of GOP enthusiasm - the GOP also outvoted Democrats by more than 120,000 votes in closed primaries this summer, with hot governor's primaries on both sides.

But a deeper dive shows some potentially good signs for Democrats.

Schale notes that at this point in 2014, Republicans led in early voting by about 8 percentage points.