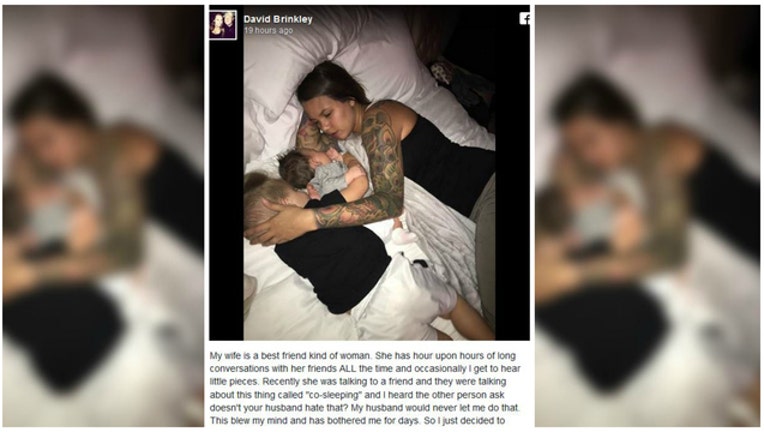 YUKON, OKLAHOMA (Fox 32 News) - A father's post supporting his wife's choice to sleep with their children has gone viral.

On Facebook, David Brinkley of Yukon, Oklahoma, shared a photo of his wife, Alora, sleeping with their toddler and their baby. He said he was sharing it after he was flabbergasted to learn that some fathers do not support co-sleeping.

"I just decided to come out as a man and set a few things straight. I do NOT hate any part of what makes my wife the mother that she is," he wrote on Facebook. "I would NEVER degrade or disregard anything that she feels like doing for my children. Do I have to squeeze into a small corner of the bed sometimes? Yeah? But my God how beautiful does she look holding my children? Making them feel loved and safe?"

Brinkley goes on to point out that his children won't be small forever and that some day, he and his wife will have their bed all to themselves again.

"Our wives only experience these little seasons in motherhood for a short time. They carry our babies they birth them they nurture them and maybe while they are little they let them crawl into our beds and snuggle but eventually our babies get bigger they grow up they get "too cool" for snuggles so why would we as men want to steal a single second of this time from them?" he writes.

Brinkley ends his post with a request to all men to respect their wives in their roles as mothers.

As of Saturday afternoon, Brinkley's post had been shared more than 67,000 times.