2019 RAV4 drivers have turned to the internet, where they are posting videos of themselves trying to fill up their tank all the way without success.

When Dolores Kollstedt bought her 2019 Toyota RAV4 Hybrid, she spared no expense, even paying extra for the burgundy color she wanted. But, she says, most important to her was the idea that driving a hybrid would mean fewer trips to the gas station and greater driving distances on a full tank.

Unfortunately, the North Texas driver reports, that's not the case.The most gas her vehicle will accept into its 14.5 gallon tank is about 8 gallons, even when the needle is on empty. She says, "Outside of when I picked it up at the dealership that was the only time it was ever at full."

She may not be alone in her experience. Other 2019 RAV4 drivers have turned to the internet where they are posting videos of themselves trying to fill up their tank all the way without success.

"It just stopped after 10 gallons," one driver said.

"We just hit 9.5 gallons," another explained after the pump shut itself off long before the tanks advertised 14.5 gallon capacity was reached.

On Toyota message boards there are hundreds of complaints from consumers, and the National Highway Traffic Safety Administration listed more than 100 fuel tank related complaints about the RAV4 Hybrid at the time of this report all making the same claim that the gas tank on the redesigned 2019 RAV4 hybrid just won't fill. Drivers say that means more trips to the gas station and shorter driving distance range on a full tank despite Toyota's ads for the car which say just the opposite.

When we asked Toyota about the problem they acknowledged the issue in the following statement:

"As part of our commitment to quality and customer satisfaction, Toyota monitors available information in the field and takes appropriate action to help address issues when they arise. Toyota is currently investigating a potential fuel tank shape issue on certain RAV4 Hybrid vehicles. Based on our ongoing investigation, we believe variations in fuel tank shape may prevent a full refill by up to several gallons, potentially impacting the vehicle's total available driving distance. As a best practice, customers should refuel before or when the low fuel light illuminates, to prevent running out of fuel." 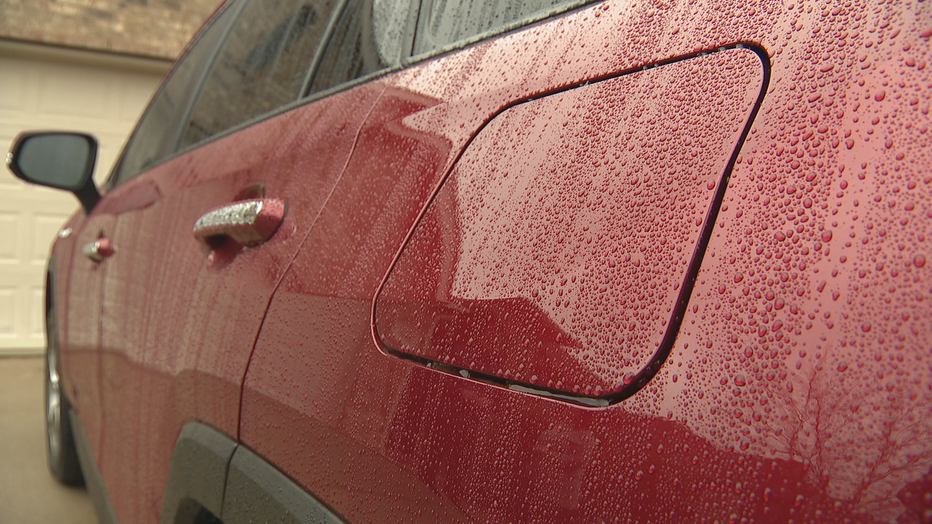 Toyota sent a tech tip to dealerships in November of 2019 acknowledging customer concerns about the gas tank and confirming their investigation. Dolores Kollstet says that's of little comfort to her and adds the company should not continue to sell these vehicles without disclosing what they know because consumers are not given all the information they need to make a decision about buying. "I wish someone would have told me when I went to purchase the car, 'Hey this is a known issue they are working on it, it's known'  that way i could have made an informed decision." she said. She says the advertised fuel capacity and driving range are misleading, particularly in light of Toyota's acknowledgment of the issue.

We reached out to Toyota to discuss related consumer complaints and were twice denied an on-camera interview.  "Toyota has nothing further to add" a Toyota spokesperson wrote. It wasn't until we reached out to the CEO of Toyota North America that we were contacted by Toyota's Chief Communications Officer. He also denied our request for an interview and asked if we had any specific questions.  We sent a list of roughly 10 questions and have not heard back.

Meantime Kollstedt has now been contacted by Toyota’s corporate office. She says they have offered to replace her gas tank, but since it’s identical to the one she already has which won’t fill, she’d rather wait for a new fueling fix.

Toyota has sold more than 94,000 2019 Rav4 Hybrids which, for the first time, knocked the Toyota Prius out of the #1 hybrid spot for the automaker.  We are told by a local dealership that the design of the gas tank for the 2020 model, already being sold, has not changed. While that model year has just recently come to market, owners have already started posting their own videos of gas tanks that won't fill to 14.5 gallons

A California Law Firm has now filed a class action lawsuit against the automaker for 2019 and 2020 model year Hybrids citing issues with the design of the gas tank which wont allow the vehicle to hold as much gas or drive as far as advertised.

Want to try to reach Toyota's CEO yourself?  The email address we used to make contact with him is Jim.Lentz@toyota.com