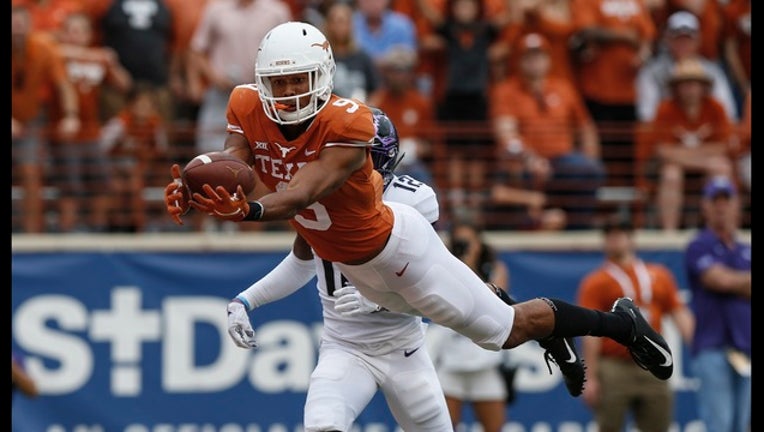 Collin Johnson of the Texas Longhorns catches a pass for a touchdown in the third quarter defended by Jeff Gladney of TCU at Darrell K Royal-Texas Memorial Stadium on September 22, 2018 in Austin, Texas. (Photo by Tim Warner/Getty Images)

AUSTIN, Texas (AP) - Texas ended four years of humiliation at the hands of TCU and put the rest of the Big 12 on notice: Yes, these Longhorns may indeed be back among the conference title contenders.

With two straight wins over ranked opponents - including Saturday's emphatic 31-16 victory over the No. 17 Horned Frogs - it's probably OK to say that now.

"In the past, we'd beat a ranked opponent and blow it away the next week. Seeing us do this tonight is just another step," said Texas wide receiver Collin Johnson, whose diving 31-yard touchdown catch gave Texas the lead in the second half. "We could be a special team. I love these guys."

Sam Ehlinger passed for two touchdowns and ran for a score, all in the third quarter, and his 38-yard touchdown pass to Lil'Jordan Humphrey late the fourth put the game away. Texas also forced four turnovers, including three by TCU quarterback Shawn Robinson in the third.

The Longhorns (3-1, 1-0 Big 12) ended a four-game losing streak to the Horned Frogs and got their first three-game win streak since 2014. Texas also has its first back-to-back wins over ranked opponents since winning three in a row in 2008, a run that vaulted Texas to No. 1 that season.

"There's a grit to this team that's a lot of fun to be around," Texas coach Tom Herman said. "All (the win) does is validate the fact that we have taken another step. We have many steps left to take."

TCU had outscored Texas 153-33 the previous four meetings and led 16-10 when Robinson began his rash of turnovers. A fumble recovery set up Johnson's touchdown and an interception return by freshman safety Caden Sterns to the TCU 2 set up Ehlinger's scoring run one play later to make it 24-16.

"When momentum and stuff is not going your way, you have to overcome," Texas defensive back Brandon Jones said. "It's really exciting to know you have dogs to your left and your right and up front. Overall, we really trust each other. It's a brotherhood for us.

Texas mostly shut down a TCU running game that had gained at least 200 yards in each of its first three games. Texas allowed the Horned Frogs (2-2, 0-1 Big 12) 141 yards on the ground Saturday, but took it away for much of the first half. Robinson passed for 197 yards.

"We prepared our guys that this was going to be an ugly, physical game," Herman said. "The defense kept us in it."

TCU: The Horned Frogs have a talent in the dual-threat Robinson, but they also have a turnover problem they will have to overcome. The sophomore has five turnovers in the last two weeks and they have been costly. Two of them led to touchdowns in a loss to Ohio State.

"We fumbled the ball and then we threw it right to them on a ball down the middle of the field," TCU coach Gary Patterson said. "You've got to play better. Much is given, much is also asked, so you've to play both of them."

Texas: The Longhorns once again have a defense that looks to be among the Big 12's best and Ehlinger continues to develop into a complete quarterback. Described by Patterson as a "running back playing quarterback" before the game, Ehlinger played his second straight game without a turnover and his passing on deep throws gets sharper every week. On the touchdown throw to Humphrey, Ehlinger first stepped up to run, then pulled back, found the open receiver and threw.

"He's having a lot more confidence in his offensive line," Herman said. "He believes in what we're calling."

Johnson had to be an acrobat on his touchdown that put Texas ahead. He had a big first half with four catches for 78 yards and the touchdown in the third quarter came when he fully extended on a dive across the goal line, then cradled the ball in his right arm as he hit the ground. Ehlinger also had to make an athletic play to get the throw off by avoiding a tackler at his ankles.

"They gave me a post (route). I was like, 'I'm not the fastest, but I'm going to just lay out and make the play,'" Johnson said.

TCU kept trying to isolate speedy receiver Jalen Reagor on Texas cornerback Kris Boyd. Reagor beat Boyd for a 1-yard touchdown catch late in the second quarter but Boyd broke up two others with uncanny timing. Both times he knocked the ball out of Reagor's hands to deny the catch. The first one broke up a touchdown on the Horned Frogs' first drive and forced them to settle for the first of three field goals.

Texas looks like a good bet to return to the rankings after consecutive wins over ranked opponents. The Horned Frogs shouldn't be surprised if they drop out after two consecutive losses.

Texas is at Kansas State next Saturday. The Longhorns have lost their last five games in Manhattan, Kansas dating to 2006.