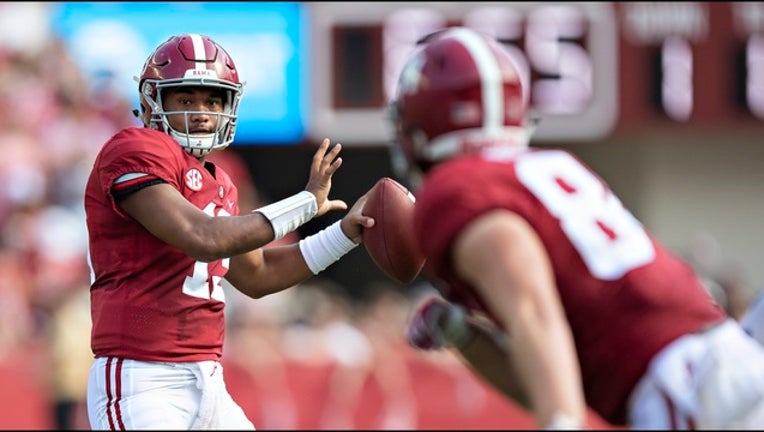 Tea Tagovailoa #13 of the Alabama Crimson Tide throws a pass to Hale Hentges in the second quarter against the Texas A&M Aggies at Bryant-Denny Stadium on September 22, 2018 in Tuscaloosa, Alabama. (Photo by Wesley Hitt/Getty Images)

TUSCALOOSA, Ala. (AP) - Tua Tagovailoa heaved his first pass to a diving DeVonta Smith in the end zone for a touchdown.

The 30-yarder wasn't a replay of their winning connection in the national championship game, but it did set the stage for No. 1 Alabama's 45-23 victory over No. 22 Texas A&M on Saturday. The game was close for a while before turning into yet another Crimson Tide romp.

"We knew coming into this game it would be a 60-minute dogfight, and that's kind of what it was," tailback Damien Harris. "They played us close in the first half but we knew if we just kept grinding away, that eventually we'd be able to pull away."

OK, it was more of a 27-minute dogfight, but that's more than other Tide opponents have mustered.

Tagovailoa passed for 387 yards and four touchdowns and ran for another score for the Tide in its first test against a ranked team. Kellen Mond and the Aggies (2-2, 0-1) couldn't put up nearly the fight they had in a 28-26 loss to No. 3 Clemson.

Tagovailoa completed 22 of 30 passes before leaving after Henry Ruggs III took a shuttle pass 57 yards for a score late in the third. He hit tight end Hale Hentges for two more scores. Hentges had only one catch in the first three games and said he hadn't had a two-TD game since his high school finale.

"I never dreamed of getting two," he said. "I always thought about just getting one."

Harris didn't get many touches but had a 35-yard run and a 52-yard catch.

"We were fortunate that we made a lot of big plays on offense," Tide coach Nick Saban said. "We really threw the ball effectively and scored a lot of points, but we really didn't control the game. We didn't control the line of scrimmage. We struggled to run the ball offensively with consistency."

Mond completed 16 of 33 passes for 196 yards with a touchdown but was intercepted twice, including on his first throw. He collected 98 yards rushing despite getting sacked seven times.

Texas A&M seemed poised for a while to give the Tide its first test of the season. But Tagovailoa & Co. scored 10 points in the final 1:09 before halftime for a 31-13 lead.

Tagovailoa set up a touchdown with a 52-yard pass down the right sideline to Harris. Then freshman cornerback Patrick Surtain Jr. intercepted Mond's deep ball and the Tide drove for a field goal.

Texas A&M coach Jimbo Fisher was impressed with Tagovailoa and his supporting cast.

Texas A&M: The Aggies had flirted with an upset of No. 3 Clemson, when Mond passed for most of his 430 yards in the second half. The Aggies couldn't muster any kind of threat after trailing just 21-13 in the second quarter.

Alabama: Once again, all but put a game away before halftime with the big-play capabilities of Tagovailoa and the Tide. 'Bama had a pair of scoring drives under a minute before the half, making it 10 already this season. Tide has outscored opponents 148-20 in the first half.

Saban improved to 13-0 against his former assistants. Fisher is 0-2, including last season's opener at Florida State. He was LSU's offensive coordinator under Saban from 2000-04.

Texas A&M might drop out of the Top 25 but Alabama further cemented its spot on the No. 1 ranking.

Texas A&M starting safety Donovan Wilson was ejected for targeting late in the first quarter for a hit on receiver Henry Ruggs III.

Alabama gets a break from league games when Louisiana-Lafayette visits.