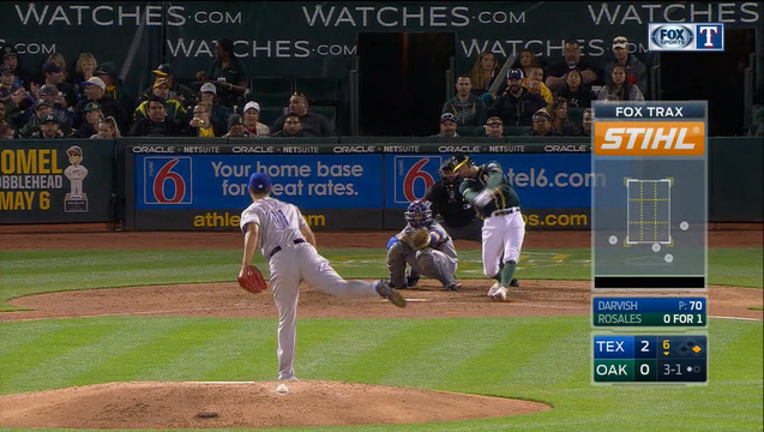 OAKLAND, Calif. (AP) - Andrew Triggs feels as though he's just starting to hit his stride, which is remarkable considering the Athletics pitcher has yet to give up an earned run this season.

Given how effective the right-hander was with a slow breaking ball against Texas, it's a tough point to argue.

In doing so, Triggs extended his streak to 17 2/3 innings without allowing an earned run - an Oakland record for starting pitchers to begin a season.

"I'd say of the three starts so far, this probably (was) as sharp all three (pitches) have been together," Triggs said. "That was encouraging from the beginning, to mix the bigger breaking ball in more. We were just able to mix and match pretty well."

Triggs (3-0) gave up two unearned runs, didn't walk a batter and had five strikeouts. He is the first A's starter to win his first three starts of the season since Tommy Milone in 2013.

"Pretty amazing," Oakland manager Bob Melvin said. "To do what he's done to this point, I'm not going to say it's a surprise, but it's definitely welcome."

Adam Rosales hit a two-run homer and Khris Davis added a sacrifice fly as part of a four-run sixth as the A's overcame their majors-leading 17th error to snap a four-game losing streak.

Darvish (1-2) faced the minimum through five, but came apart in the sixth and lost for the fourth time in six starts at the Oakland Coliseum. The Texas right-hander allowed four runs in 5 1/3 innings with two walks and four strikeouts.

The Rangers scored a pair of unearned runs off Triggs in the sixth following a fielding error by Oakland first baseman Yonder Alonso, but were blanked the rest of the way.

Rangers left fielder Jurickson Profar made a diving catch to rob Bruce Maxwell of a hit in the sixth inning. A day earlier, Profar made a similar catch on Stephen Vogt's sinking liner.

Oakland pitchers had walked 15 batters over the previous two games but did not give up a single free pass against Texas in the second game of the series. "When you don't allow guys on without working too hard at it, it makes them have to hit their way on base and you have to string together multiple hits," Melvin said. "That was big for us as a whole tonight."

Rangers: 3B Adrian Beltre remains sidelined with a calf strain and Banister said there is still no timetable for his return. "I know he's been frustrated with the healing process," Banister said. "He's working as hard as he can. He's doing everything he can."

Athletics: Sonny Gray reported no pain following his 47-pitch outing in extended spring training on Monday. The right-hander, on the disabled list since April 1 with a strained shoulder, is slated to extend to 65 pitches this weekend with Single-A Stockton. ... Chris Bassitt (right UCL surgery) will pitch two innings in extended spring training Wednesday. ... INF Joey Wendle (strained right shoulder) was sent to Triple-A Nashville to begin a rehab assignment. .. The A's plan to call up right-hander Cesar Valdez to start Thursday against Seattle. Valdez hasn't pitched in the majors since 2010.

Left-hander Martin Perez (1-1) starts the series finale for Texas on Wednesday, while the A's counter with right-hander Jesse Hahn (0-1). Perez has allowed just one run over his past 10 1/3 innings and his 2.20 ERA is lowest among Rangers starters. Hahn is winless in three career starts against Texas.