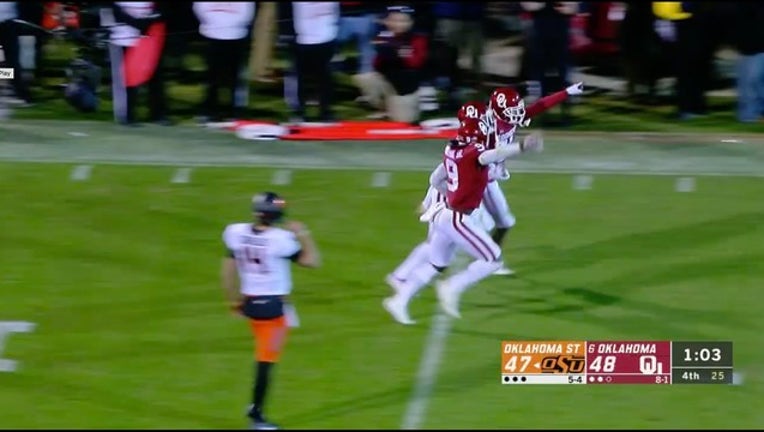 And in what the Sooners call "Championship November," nothing is more important.

Kyler Murray passed for 349 yards and ran for 66 and No. 6 Oklahoma survived a late two-point conversion attempt to beat Oklahoma State 48-47 on Saturday. The Sooners continued their push for a Big 12 title and a spot in the College Football Playoff by winning their 15th consecutive November game dating to 2014.

It was another close call - the victory came a week after Oklahoma edged Texas Tech 51-46. The Sooners will take the shootouts as long as they keep getting the best of them.

"As bad as we played on defense, coming out with a 'W' is all that matters," Oklahoma linebacker Curtis Bolton said. "You can play good defense and lose a game, and it doesn't matter that you played good defense. It matters that you lost the game. So even if you're playing bad defense, we played good when it counted and came out with a 'W,' and at the end of the day, that's what matters."

Oklahoma nearly saw its chances of reaching its goals vanish. Oklahoma State's Taylor Cornelius connected with Tylan Wallace on a 24-yard touchdown pass to cut Oklahoma's lead to one with 1:03 to play. Oklahoma State went for two, but Cornelius threw short and into coverage, Oklahoma's Tre Brown got his hand on the ball and the pass fell incomplete.

Oklahoma State coach Mike Gundy was confident in his decision to go for two.

"As the game was going back and forth, on the road, struggling stopping them - probably the best thing," he said. "Had a shot at it, just didn't make a good throw."

Oklahoma recovered the onside kick and ran out the clock.

Cornelius passed for a career-high 501 yards and three touchdowns for the Cowboys (5-5, 2-5). Wallace caught 10 passes for 220 yards and two scores. Chuba Hubbard ran for 104 yards and three scores, but he lost a critical fumble in the fourth quarter.

"Were we at our best tonight? No," Riley said. "Especially in the first half. Especially there. We did miss more tackles than we have been missing. It's something that we're going to have to do better."

Oklahoma State took a 35-34 lead in the third quarter on Hubbard's 2-yard run, but the Sooners responded quickly. Brooks had a 5-yard touchdown on the last play of the third quarter to give Oklahoma a 41-35 lead.

With Oklahoma State driving for the lead, Hubbard fumbled, and Oklahoma's Kenneth Murray recovered with 6:09 to play. Oklahoma took advantage when Trey Sermon powered in from the 1 with 3:29 left, setting up Oklahoma State's final drive.

For all that Cornelius accomplished - he produced the third-highest passing yardage total in Oklahoma State history - he missed the pass he needed most.

"Sometimes in life, things don't always go your way," Gundy said. "But I told the team I couldn't be any more proud of them. Came to the fight, stood tall and said, 'Here I am.' That's what we asked them to do, and that's what they did."

Oklahoma State: The Cowboys have an offense that can compete with any team in the Big 12, but the defense gave up 702 yards. Oklahoma State has allowed at least 30 points in five straight games.

Oklahoma: The Sooners continue to score almost at will, but their defense, though showing signs of improvement, continues to struggle.

The Sooners shouldn't be hurt by the close victory over the unranked Cowboys, who have wins over Boise State and Texas.

Wallace's 220 yards were the ninth-most in a single game in Oklahoma State history. He had 222 against Texas two weeks ago, the eighth-best total ever at Oklahoma State. He has 1,282 yards this season, the ninth-best total in school history, with two regular-season games to go.