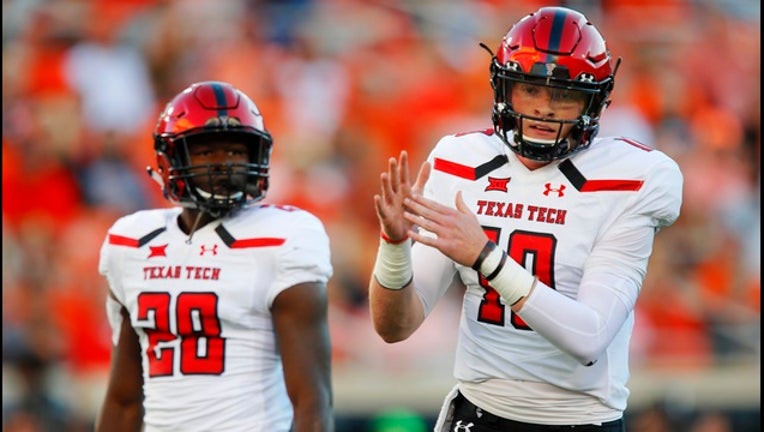 No more than three Big 12 teams will be make it through the first two conference games without a league loss - West Virginia or suddenly surging Texas Tech will be one of them. The Red Raiders lost their opener to Ole Miss before scoring 77 and 63 points to start a winning streak that continued with a 41-17 victory at Oklahoma State in their Big 12 opener. They haven't won consecutive games over top-15 teams in 10 years. The Mountaineers, after an unexpected week off due to a cancelation because of Hurricane Florence, opened conference play with a 35-6 win over Kansas State.

The quarterbacks, senior Heisman Trophy hopeful Will Grier vs. Texas Tech freshman Alan Bowman, the national leader with 389 yards passing per game. Grier has 1,117 yards passing (372 a game, third in FBS) with 14 TDs in three games. West Virginia launched a Heisman campaign for Grier this summer after his 3,490 yards and 34 TDs in 11 games last year. Bowman took over for injured McLane Carter in the first half of the opener and is 3-0 as the starter. Bowman has 10 TDs with only two interceptions in 179 attempts.

West Virginia: WR David Sills V, who matched the FBS lead last year with 18 TD catches, has five this season. Three of those scores came among his 10 catches against K-State.

Texas Tech: Freshman RBs Ta'Zhawn Henry has rushed for 231 yards and a Big 12-leading six rushing TDs in the past three games.

West Virginia has scored on all 12 of its trips into the red zone (nine TDs). ... The Red Raiders rank fourth nationally with 16 rushing TDs, five more than any other Big 12 team. ... For all its big-play offense, Texas Tech ranks fifth nationally - and first among FBS teams - in time of possession at 36 minutes a game. ... The Mountaineers lead the Big 12 with 10.3 tackles for loss per game.