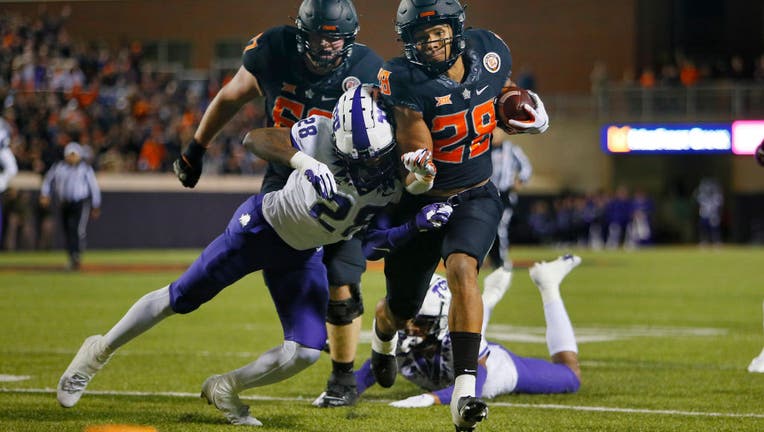 STILLWATER, OK - NOVEMBER 13: Wide receiver Blaine Green #28 of the Oklahoma State Cowboys makes a 31-yard catch as he gets knocked out of bounds at the three yard line by safety Nook Bradford #28 of the Texas Christian University Horned Frogs in the

STILLWATER, Okla, (AP) - With Heisman Trophy-winning running back Barry Sanders on hand, Oklahoma State showed it still can run the football at an elite level.

It was a great all-around day for the program. A 9-foot bronze statue of Sanders was unveiled outside of Oklahoma State’s Boone Pickens Stadium before the game. At halftime, the 1988 Heisman winner's name and No. 21 jersey number were put in the Cowboy Football Ring of Honor inside the stadium.

Oklahoma State put on a rushing clinic in front of Sanders, former players who returned to campus to support him and a crowd dressed in black. The rushing touchdown total was the second-best in program history. Dominic Richardson and Dezmon Jackson each had two rushing scores.

"The offensive line played well," Oklahoma State quarterback Spencer Sanders said. "I feel like the offensive line just really dominated the front today, and that really helped our backs, and our backs made a couple of guys miss and made some wonderful plays."

The Cowboys (9-1, 6-1 Big 12, No. 10 CFP) won their third straight. Oklahoma State moved into a tie for first place in the conference with Oklahoma with two games remaining, including a showdown with the Sooners on Nov. 27.

Warren ran for 103 yards and three touchdowns on 14 carries in the first half as the Cowboys took a 28-3 lead. Oklahoma State gained 352 yards and held TCU to 162.

The Cowboys took control by outscoring the Horned Frogs 21-0 in the second quarter. They closed out the first-half scoring with a 46-yard touchdown pass from Spencer Sanders to freshman Blaine Green.

"They out-physicaled, outplayed us, outcoached us," TCU interim coach Jerry Kill said. "There's not a whole lot to say when you get beat like that."

TCU has already played SMU, Baylor and Oklahoma, but Kill said Oklahoma State tops them all.

"They tried tonight, but we just got beat by a better, more physical football team — the best team we’ve played."

Oklahoma State: The offense is catching up with a defense that has been strong all season. Most notably, Sanders has improved as a passer and decision maker. He went without a turnover, threw several balls away when nothing was available and slid to avoid contact.

The Cowboys could jump a spot with Oklahoma losing to Baylor. They could move even more if the margin of victory matters to voters.

Oklahoma State coach Mike Gundy didn't hold back on how he feels about his former teammate. Gundy was Oklahoma State's quarterback during Sanders' Heisman season.

"This day was for the greatest college running back ever," Gundy said. "I don’t think that’s even up for debate."

Gundy, on keeping his team focused:

"I spend my time stressing to them the importance of what tomorrow brings and what’s got them here," he said. "What’s got them to this point is their focus, their discipline, their toughness and staying the course. And it’s just so difficult in the world today with social media and the outside people who now are going to tell him how great they are and more than ever for them to stay focused."