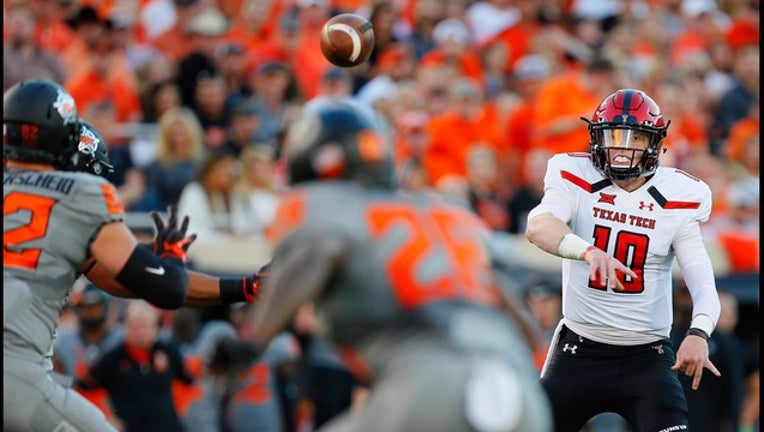 STILLWATER, Okla. (AP) - Alan Bowman threw for 397 yards and two touchdowns and Texas Tech ended a nine-game losing streak to Oklahoma State with a 41-17 victory over the No. 15 Cowboys on Saturday night.

The win is the third straight since a season-opening loss to Mississippi for the Red Raiders (3-1, 1-0 Big 12), whose last victory over Oklahoma State came in 2008.

Bowman completed 35 of 46 passes in his Big 12 debut, guiding the nation's top offense to 621 total yards. Demarcus Felton added a pair of rushing touchdowns for Texas Tech and finished with 121 yards rushing on 12 carries.

"(Bowman's) not hesitant for a young guy to do what he's doing," Texas Tech coach Kliff Kingsbury said. "It's impressive. I've been in his shoes and coached young guys, and he just cuts it loose."

Nine Red Raiders caught passes in the win, with Ja'Deion High leading the way with eight catches for 79 yards and Antoine Wesley and Zach Austin finishing with seven catches apiece.

Justice Hill rushed 12 times for 111 yards and a touchdown for the Cowboys (3-1, 0-1), the 10th straight game the junior has scored. Tylan Wallace had seven catches for 123 yards.

After leading Oklahoma State to a win over Boise State a week ago, Oklahoma State quarterback Taylor Cornelius struggled - finishing 18-of-38 passing for 258 yards with a touchdown and interception.

"It's pretty simple," Oklahoma State coach Mike Gundy said. "We got out-coached and out-played, and they were tougher than us. I mean, I don't really know any other way to put it."

The win was the first against the Cowboys for Kingsbury, who is now 1-5 against Oklahoma State and Gundy.

"He's had our number a long time," Kingsbury said. "So, for those guys to come out and play the way they did, I'm just proud of their effort and hopefully we can build off it."

It wasn't a 605-yard passing performance for Bowman, like last week when the Texas Tech signal caller set the Big 12's freshman record in a win over Houston. That said, the win was nothing short of a Big 12 coming-out party for the 6-foot-3, 210-pound quarterback who has led the Red Raiders to three straight wins after entering the loss to Ole Miss after an injury to starter McLane Carter.

Oklahoma State entered the game sixth in the country in total offense and having outscored its first three opponents by a total of 157-51. The Cowboys never could quite get in sync against Texas Tech, but a favorable schedule over the next three weeks could help them make amends with voters.

The Cowboys are at Kansas.