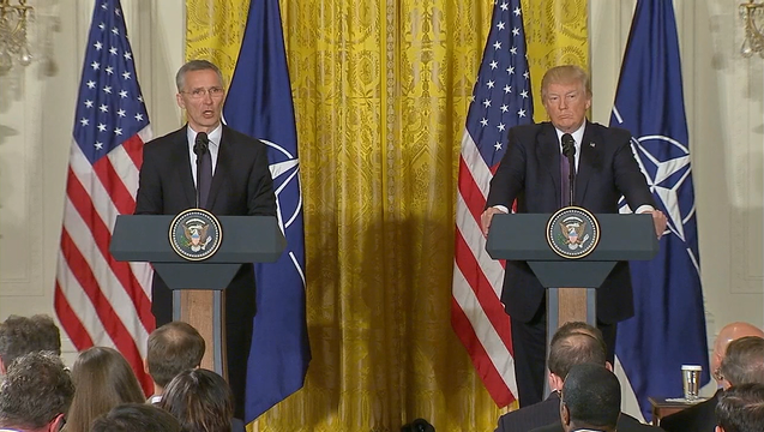 WASHINGTON (AP) - Laying bare deep and dangerous divisions on Syria and other issues, President Donald Trump declared Wednesday that U.S. relations with Russia "may be at an all-time low." His top diplomat offered a similarly grim assessment from the other side of the globe after meeting with Vladimir Putin in Moscow.

"Right now we're not getting along with Russia at all," Trump said flatly during a White House news conference. It was stark evidence that the president is moving ever further from his campaign promises to establish better ties with Moscow.

Only weeks ago, it appeared that Trump, who praised Putin throughout the U.S. election campaign, was poised for a potentially historic rapprochement with Russia. But any such expectations have crashed into reality amid the nasty back-and-forth over Syria and ongoing U.S. investigations into Russia's alleged interference in America's U.S. presidential election.

"That could happen, and it may not happen," he said. "It may be just the opposite."

Not long before Trump spoke in Washington, Secretary of State Rex Tillerson struck a similar tone after an almost two-hour meeting with Putin, saying the two countries had reached a "low point" in relations.

The president, who last week ordered airstrikes on a Syrian air base in retaliation for a chemical weapons attack, was asked if Syria could have launched the attack without Russia's knowledge. Trump said it was "certainly possible" though "probably unlikely."

More than 80 people were killed in what the U.S. has described as a nerve gas attack that Syrian President Bashar Assad's forces undoubtedly carried out. Russia says rebels were responsible for whatever chemical agent was used, which the Trump administration calls a disinformation campaign.

Not long before Trump spoke, Russia vetoed a Western-backed U.N. resolution that would have condemned the chemical weapons attack and demanded a speedy investigation.

The dim view of U.S.-Russian ties from both Trump and Tillerson reflected the former Cold War foes' inability to forge better relations, as Trump until recently has advocated.

Allegations of collusion between Russian officials and Trump campaign associates also have weakened Trump's ability to make concessions to Russia in any agreement, lest he be accused of rewarding bad behavior. Russia wants the U.S. to eliminate sanctions on Moscow related to its 2014 annexation of Ukraine's Crimea region and support for pro-Russian separatists in eastern Ukraine.

Until the chemical attack, the Trump administration had sought to step back from the U.S. position that Assad should leave power. But Tillerson repeated the administration's new belief that "the reign of the Assad family is coming to an end."

Trump's hardened view of Russia - including the administration's change of heart on Syria - could serve another purpose: It could partly defang a perception of coziness between Trump and Moscow. As the FBI and multiple congressional committees investigate potential collusion between Russia and Trump's campaign, the president can point to his hard-line stance on Assad as evidence he's willing to stand up to Putin.

Beyond Syria, Russia's alleged meddling in the U.S. presidential election also hovered over what was the first face-to-face encounter between Putin and any Trump administration Cabinet member.

"We have not seen a single fact, or even a hint of facts," he said. "I do not know who saw them. No one showed us anything, no one said anything, although we repeatedly asked to produce the details on which these unfounded accusations lie."

Still, Tillerson sought to stress the positives from his meetings. He said working groups would be established to improve U.S.-Russian ties and identify problems. He said the two sides would also discuss disagreements on Syria and how to end the country's six-year civil war.

But such hopes appeared optimistic as the diplomats outlined their sharply diverging views on Syria. Tillerson said Syria's government had committed more than 50 attacks using chlorine or other chemical weapons over the duration of the conflict. And he suggested that possible war crimes charges could be levied against the Syrian leader. Russia has never publicly acknowledged any such attacks by Assad's forces and has tried for the past 18 months to help him expand his authority in Syria.

The civil war is separate from the U.S.-led effort against the Islamic State group in the north of the country.

While the most immediate U.S.-Russian dispute concerns culpability for the chemical weapons, broader disagreements over everything from Ukraine to Russia's support for once-fringe candidates in European elections are among other sore points.

Tillerson was greeted frostily in the Russian capital as Lavrov began their meeting Wednesday by demanding to know America's "real intentions."

"We have seen very alarming actions recently with an unlawful attack against Syria," Lavrov said, referring to the 59 Tomahawk missiles Trump launched at an air base to punish Assad for using chemical weapons. "We consider it of utmost importance to prevent the risks of replay of similar action in the future."

Trump and others have indeed threatened similar action. But in a Fox Business Network interview, the U.S. president said he wouldn't intervene militarily against Assad unless the Syrian leader resorts to using weapons of mass destruction again. "Are we going to get involved with Syria? No," Trump said. But, he added, "I see them using gas ... we have to do something."