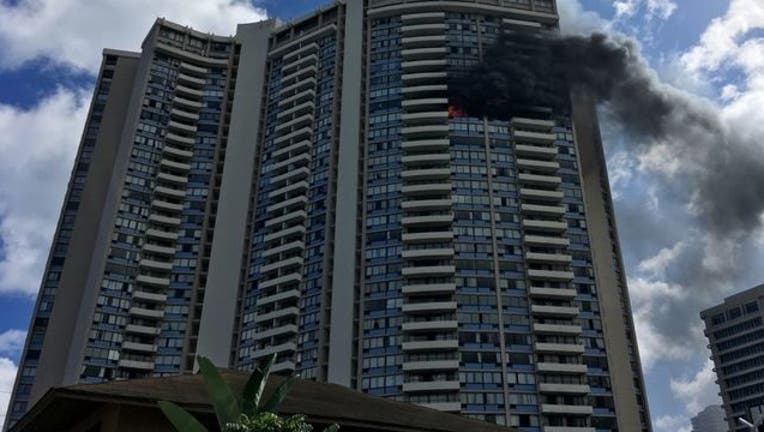 HONOLULU (AP) - As flames raged through a Honolulu high-rise building, killing three people and injuring a dozen others, some residents didn't even realize a blaze had broken out until they opened their doors or saw firefighters racing to battle the inferno.

Several Marco Polo high-rise residents told The Associated Press the sirens are located in the hallways and they had trouble hearing them when the blaze started. There were also no flashing alarm lights or public announcements about the deadly fire, they said.

Britt Reller was in the shower when the fire started and didn't realize the building was ablaze until smoke began billowing through his apartment, his brother said. He rushed out to try to save his 85-year-old mother, but he couldn't reach her and sought refuge from the smoke and flames under a bed.

His brother, a local pastor, was on the phone with Reller at the time. He never heard from him again, and police later told him that both Reller and his mother, Melba Jeannine Dilley, were among those killed.

"He said the smoke was very, very thick, and I heard him calling for my mother and then the phone went dead," Reller said. "I drove about 12 miles from my office to his apartment and then I just had to watch from outside. I'm still in shock. It is just surreal."

Joanna Kuwata, 71, who was single and lived alone on the 26th floor of the building, was also killed in the fire, her sister told The Honolulu Star-Advertiser. Jayne Matsuyama said her sister's apartment was not damaged by fire, and she suspects she died of smoke inhalation.

Fire officials have not released any information about a possible cause for the blaze. A fire department spokesman did not immediately respond to a request for additional information on Sunday.

"It didn't sound quite like a normal traditional fire alarm," said Air Force cyber technician Cory La Roe, who didn't know the building had no sprinklers when he moved in in May.

LaRoe, who is from Florida but living in Hawaii while serving in the military, said there were no announcements or flashing lights when the fire broke out.

"I just heard a loud ringing, which is what caused me to look outside. I actually thought it was something from the street that was making the noise. After I saw people running out and went out the hallway myself, that's when I knew it was a fire alarm going off."

Gordon Kihune, who has lived in the building for about 12 years, said he hasn't seen any fire extinguishers or hoses in the building that he can remember. He didn't hear the alarms going off when the fire broke out, Kihune said.

He said he "only recognized the fact that there was something wrong when I saw the firetrucks pull up, and then I poked my head out, then I could hear the alarm."

Kihune said he has a "bit of a hearing problem" with high-pitched sounds. But because the alarm is in the hallway and not close to his apartment, he could not hear it, he said.

"For people that have that disability, it could be a reason for not hearing it," Kihune said.

Angela Kim, a 30th-floor resident, said she can only hear the sirens if her apartment door is open. She recalled an earlier fire alarm test that she missed entirely. "I slept through it, it's so soft," she said.

The fire broke out in a unit on the 26th floor, where all three of the dead were found, Fire Chief Manuel Neves said.

The building known as the Marco Polo residences is not required to have fire sprinklers, which would have confined the blaze to the unit where it started, Neves said. The 36-floor building near the tourist mecca of Waikiki was built in 1971, before sprinklers were mandatory in high-rises. It has over 500 units.

Douglas Hesley, branch president of Associa Hawaii, the management group that runs the Marco Polo building, said in a brief statement Saturday that there will be an emergency board meeting to discuss recovery efforts.

Hesley said he could not comment on past fire drills or safety plans that were in place at the time of the fire.

Honolulu Mayor Kirk Caldwell said the city needs to look at passing a law requiring that older buildings be retrofitted with sprinklers.

In 2005, a previous mayor made a similar plea, creating a task force to investigate the costs and arguments for retrofitting older buildings with fire prevention measures including sprinklers. The rule was never implemented.

Tyler Takahata said he owned a unit on the 28th floor until 2015, when he sold the apartment to an elderly woman who was downsizing. He said he was never worried about fire during the five years he lived there because the building had water hoses and extinguishers.

"The fire suppression system seemed adequate. There were hardly any false alarms," he said.

His former apartment is just above the unit where the blaze started and is now completely destroyed. He doesn't know the whereabouts of the woman who moved in.