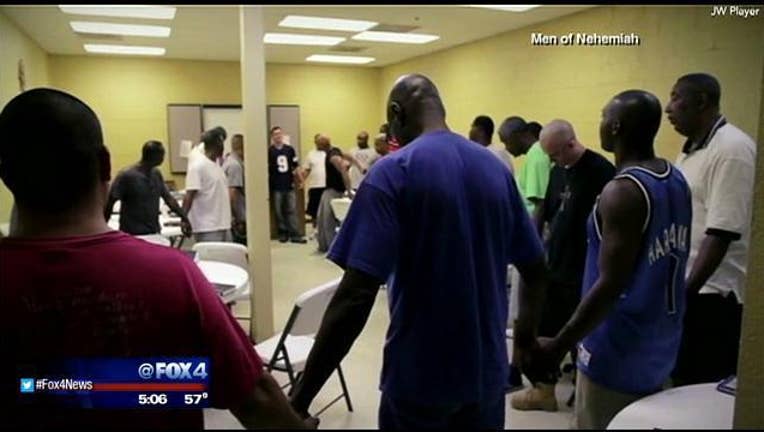 Easter Sunday is when millions of Christians around the world celebrate the resurrection of their Savior.

Fox 4's James Rose attended a unique service in Dallas Sunday with The Men of Nehemiah. It's a residential and recovery ministry for homeless and formerly incarcerated men.

"From millionaires to the poorest of the poor! And we just jam man! We just praise God," says Louis Harrell.

This grainy home video captures the spirit of the Easter Sunday service. And as the song says, it is raining in the Missionary Baptist Church in South Dallas, and no one even cares.

This is perhaps one of the most eclectic congregations you will ever see. There are doctors, lawyers, and convicts of all kinds, all coming together in fellowship.

"We're talking drug addicts, robbers, and murderers." Louis Harrell explains. "Yea, some of the worst of the worst."

Louis Harrell, the Director and Founder of The Men of Nehemiah, says he was once one of the them. "I had a long, long ugly drug addiction. Bad, over 20 years."

After moving to Dallas in 2010 and losing his wife, Harrell decided to resurrect a program his father, a former Pastor in New Orleans started for him.

It's a regimented biblical program that gives food, shelter, spiritual guidance and discipline to those trying to free themselves from the grips of addiction.

"We restore. We restore men to their rightful spiritual position. As fathers," Harrell says.

"I literally believe I was right next to death. I mean I was living like an animal. I was living in abandoned houses. Eating out of garbage cans," says Ty Choice.

Ty is now a graduate and mentor of the program says he once considered himself trash. He says it saved his life when some men came marching by.

"I asked them, I said man what are ya'll doing? And they said picking up trash for the Lord. And just the night before I was sleeping behind a dumpster and I remember crying out to God saying God I need help I'd rather go back to prison than live like this," Ty explains.

"For whatever reason, God has lead various people here," Louis says. "I've seen amazing transformation." But Harrell says it's not for everyone. "I get a lot of guys that are crisis reactionary whether it's the court or they got kicked out of their home or whatever, you know I want help! I want help! You don't really want help. This is not a play house."

Harrell says it's not easy. No different than basic training and that it's what this is for life.

"As soon as I walked through the doors I knew I was home," Officer Nick Novello says. Novello is a Dallas Police Officers of nearly 35 years and believes in the program. "This is not a support group. This is the very Body of Christ, these are people who are broken who understand that they are totally dependent on Grace and mercy."

Harrell says his program may be different but it is making a difference, changing lives for the better.