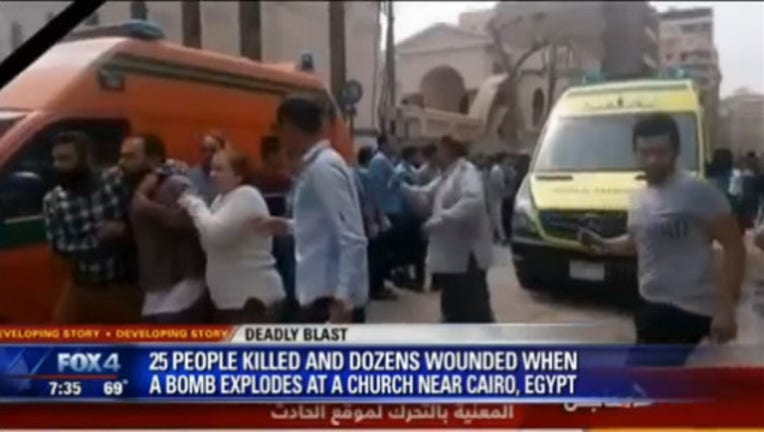 TANTA, Egypt - Bombs exploded at two Coptic churches in different cities in northern Egypt as worshippers were celebrating Palm Sunday, killing at least 43 people and wounding about 100 in an assault claimed by the Islamic State group.

The blasts came at the start of Holy Week leading up to Easter, and just weeks before Pope Francis is due to visit the Arab world's most populous country, which has been beset by extremist violence against its minority Christians.

In the first attack, a bomb went off inside St. George's Church in the Nile Delta city of Tanta, killing at least 27 people and wounding 78, officials said.

A few hours later, a suicide bomber rushed toward St. Mark's Cathedral in the coastal city of Alexandria, the historic seat of Christendom in Egypt, killing at least 16 people and wounding 41, the Interior Ministry said.

CCTV images broadcast on Egyptian channels showed a man in a blue pullover approach the main gate to St. Mark's but being turned away and directed toward a metal detector. The man then passes a female police officer chatting to another woman, and enters a metal detector before an explosion engulfs the area.

Pope Tawadros II had held Palm Sunday services at the cathedral, but his aides said he had escaped unharmed. The timing of the attack raised the question of whether the bomber had sought to assassinate the pope, leader of one of the world's oldest Christian communities.

IS claimed the attacks via its Aamaq news agency, after having recently warned that it would step up violence against Egypt's Christians.

CBC TV showed footage from inside the church in Tanta, where people gathered around what appeared to be lifeless, bloody bodies covered with papers.

"After the explosion, everything became dark from the smoke," said Edmond Edward, attending services with his brother, Emil, who was wounded and leaned on him for support at a nearby hospital, his head covered in bandages.

"There was a clear lapse in security, which must be tightened from now on to save lives," he said. He added that the blast appeared to be centered near the altar and that the priest leading the service, Father Daniel, was wounded.

Susan Mikhail, whose apartment balcony across the street has a clear view of the church and its front yard, said the explosion violently shook her building.

"Deacons were the first to run out of the church. Many of them had blood on their white robes," she told The Associated Press. Later, the more seriously wounded were carried out by other survivors and taken to hospitals in private cars, she said.

Hundreds of residents gathered in the area, and church members blocked people - including journalists - from entering the church as police cordoned off the area.

President Donald Trump tweeted that he is "so sad to hear of the terrorist attack" against the U.S. ally but added that he has "great confidence" that Egyptian President Abdel-Fattah el-Sissi, "will handle the situation properly." The two leaders met at the White House on April 3.

Grand Sheikh Ahmed el-Tayeb, head of Egypt's Al-Azhar - the leading center of learning in Sunni Islam - also condemned the attacks, calling them a "despicable terrorist bombing that targeted the lives of innocents."

Both Israel and the Islamic Hamas movement ruling neighboring Gaza condemned the bombings as well.

The bombings added to fears that Islamic extremists who have long been battling security forces in the Sinai Peninsula are shifting their focus to civilians.

An Islamic State affiliate claimed a December suicide bombing at a Cairo church that killed about 30 people, mostly women, as well as a string of killings in the northern Sinai that caused hundreds of Christians to flee to safer areas of the country.

The militants recently released a video vowing to step up attacks against Christians, whom they regard as "infidels" empowering the West against Muslims.

Egypt has struggled to combat a wave of Islamic militancy since the 2013 military overthrow of an elected Islamist president.

The Sinai-based IS affiliate has mainly attacked police and soldiers, but has also claimed bombings that killed civilians, including the downing of a Russian passenger jetliner in the Sinai in 2015, which killed all 224 people aboard and devastated Egypt's tourism industry.

Egypt's Copts are one of the oldest Christian communities in the Middle East. They have long complained of discrimination and that the government does not do enough to protect them.

Egyptian media had previously reported that the church in Tanta had been targeted before, with a bomb defused there in late March.

The Copts were largely supportive of the military overthrow of Islamist President Mohammed Morsi, and incurred the wrath of many of his followers, who attacked churches and other Christian institutions.

While the Copts have stood steadfast alongside the government, repeating the mantra that Egyptians were all being targeted by terrorists, an increase in attacks on Christians has tested that support.

Outside the Tanta hospital, 27-year-old carpenter Maged Saleh flew into a rage as blood streamed from his arm after he and his mother escaped the explosion.

"Where is the government?" he screamed at onlookers. "There is no government!"