Jeremy Renner just revealed the full extent of his injuries from his snowplow accident, saying he shattered more than 30 bones in his body. Renner added that his daily routine has been impacted as a result of what happened, particularly his morning workouts. He gave an example by posting a photo of himself doing leg stretches in bed as part of his physical therapy.

Jeremy Renner revealed that he suffered "30 plus broken bones" as he shared a new health update after his devastating snowplow accident on New Year's Day.

The 52-year-old actor also expressed his gratitude for the outpouring of love and support that he has received since the accident in an Instagram post on Saturday.

"Morning workouts, resolutions all changed this particular new years …. Spawned from tragedy for my entire family, and quickly focused into uniting actionable love," "The Hurt Locker" star wrote in the caption of his post.

He continued, "I want to thank EVERYONE for their messages and thoughtfulness for my family and I …. Much love and appreciation to you all."

"These 30 plus broken bones will mend, grow stronger, just like the love and bond with family and friends deepens . Love and blessings to you all," Renner concluded, adding red heart and prayer hands emojis.

In the photo that Renner shared, he was seen lying in a bed with his hands clasped on his chest as he appeared to be undergoing physical therapy.

Renner's accident occurred on Jan. 1 when he was attempting to assist a family member after the vehicle that his relative was driving became stuck in the snow, per statements made by authorities. An estimated three feet of snow had fallen during a storm the night before in Reno, where Renner owns a home near Lake Tahoe.

Using his PistenBully, a 14,000-pound snowcat, Renner was able to successfully extricate the vehicle from his driveway. Afterward, he exited the Pistenbully and was speaking to the family member when the snowplow began to roll unexpectedly. 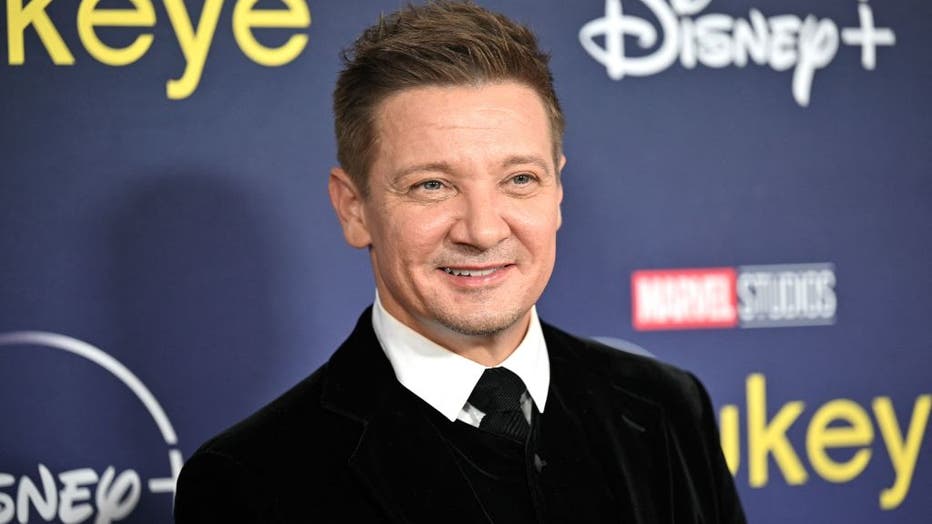 US actor Jeremy Renner arrives for the premiere of Marvel Studios' television miniseries "Hawkeye" at the El Capitan Theatre in Los Angeles, November 17, 2021. (Photo by Robyn Beck/AFP via Getty Images)

When the "Hawkeye" actor attempted to get back into the Pistenbully to stop it from moving, he was "run over" by the massive snow groomer.

According to a 911 call log obtained by Fox News Digital, Renner was "completely crushed" underneath the snowcat and had difficulty "breathing" after the accident. The call log also stated that the Marvel star was "bleeding heavily from his head and other unknown injuries." In addition, it was noted that the caller believed that Renner's "right side of his chest is collapsed" and "upper torso is crushed."

Several of Renner's neighbors quickly came to his aid, and he was airlifted to the hospital in Reno where he underwent surgery the following day, per his representative.

"We can confirm that Jeremy has suffered blunt chest trauma and orthopedic injuries and has undergone surgery today, Jan. 2, 2023," a statement from Renner's representative said, according to People. "He has returned from surgery and remains in the intensive care unit in critical but stable condition."

On Jan. 3, Renner's representative told Fox News Digital, "He remains in ICU in critical but stable condition. He is overwhelmed by the showing of love and support. The family asks for your continued thoughts while he heals with his close loved ones."

While in hospitalized in the ICU, Renner shared regular updates on his condition with his fans on social media.

On Monday, the California native revealed he was home from the hospital in a post that he shared to Twitter.

"Mike and Iris found calm among the chaos. The #MayorOfKingstown season 2 premiere is available NOW on @paramountplus," the tweet read alongside stills from the show.

"Outside my brain fog in recovery, I was very excited to watch episode 201 with my family at home," Renner replied.

It's unclear when Renner was discharged from the hospital, however season two of "Mayor of Kingstown" premiered on Jan. 15. The actor stars as Mike McLusky in the thriller.

"Getting run over by a nearly 15,000-pound piece of heavy machinery may not only be life-threatening, but life ending," Glatter said. "The very fact that Renner has survived and is making good progress thus far is certainly encouraging."

The physician, who treated athletes during the 2016 Rio Olympics, also weighed in on whether Renner will ever be able to return to the big screen as an action star.

"The risk of long-term or chronic pain resulting from all of his injuries [such as possible rib fractures, a potential sternal fracture and cardiac contusion] presents ongoing challenges for rehabilitation," he said.

"That said, his ability to return to acting will be determined by how his rehabilitation progresses."