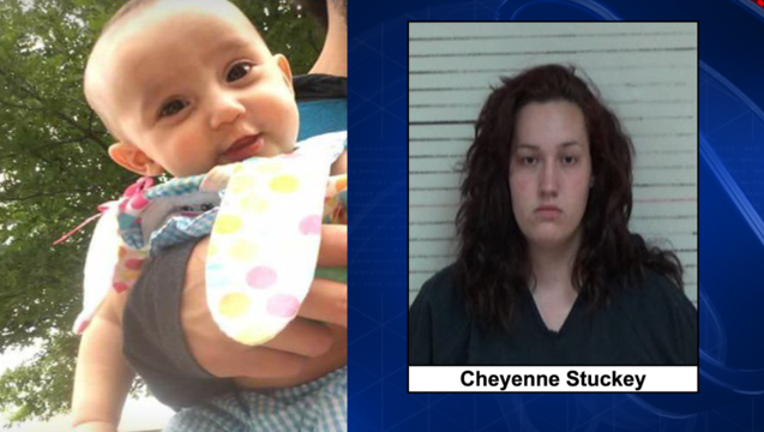 RENO, Texas - The sister of the Parker County woman accused of leaving her infant daughter in a bathtub unattended is coming to her defense.

21-year-old Cheyenne Stuckey bonded out of the Parker County Jail on Friday. She's charged with injury to a child.

Investigators say Stuckey left 7-month-old Zayla Hernandez in a bathtub for 18 minutes unsupervised, resulting in the little girl drowning. Her three other children, who were also home at the time, are back in CPS custody.

Stuckey’s sister, Hanna Ledbetter, spoke to FOX 4 by Skype. She said her sister made a terrible mistake but says Stuckey is a good mother. She also revealed why Stuckey's three other children were temporarily taken away by CPS over a year ago.

Holding back the tears, Ledbetter says she found out about the death of her niece through a frantic phone call made by a friend.

Stuckey is accused of leaving her infant daughter unattended in a bathtub with the water running while she chatted on Facebook in a bedroom located on the opposite side of their Reno mobile home.

“She was a wonderful mom. She loved her kids more than anything,” Ledbetter said. “And it was a tragic accident. It was not… she would never intentionally hurt her kids or even kill them or anything like that. And I just want people to stop talking about it, stop criticizing her and putting her down. It was a simple accident. Accidents happen.”

Parker County Sheriff’s Deputies say the June 13 drowning was no accident and charged Stuckey with injury to a child. They also removed her three other children from the home, twin 4-year-old girls and a 2-year-old boy.

According to an arrest warrant affidavit, those same three children had been in CPS custody before. Ledbetter says, in that case, her sister was in the shower when the twins got out of the house.

“The girls ran outside and ran to the parking lot of the apartment complex,” Ledbetter said. “That's what happened, but everyone said she was neglecting. She was not neglecting her kids. She's a wonderful mother. She did the best she can.”

But investigators disagree. They placed Stuckey’s children in the hands of CPS once again while her criminal case involving the death of her youngest child works its way through the justice system.

“My heart breaks so much for them, but I can't do nothing,” Ledbetter said. “But we're trying to get them back. That's all I know. I'm more worried about Cheyenne.”

FOX 4 requested a copy of the original removal order filed by CPS to see if what Ledbetter says happened, the day the twins got out of the house, matches the narrative signed off on by a judge.

Ledbetter says all four children share the same father but claims her sister does all the parenting.