There was joy in both the giving and receiving Friday night at a Collin County nonprofit.

PLANO, Texas - There was joy in both the giving and receiving Friday night at a Collin County nonprofit.

Volunteers provided some 1,600 families in need with a turkey and everything needed for a Thanksgiving meal.

It took a lot of work to coordinate and execute at the Storehouse of Collin County.

Each year, organizers say they tweak it to make it a little more efficient.

It is quite the endeavor to hand out so many meals in a short period of time, but it’s something the volunteers were happy to take on.

With Thanksgiving right around the corner, 1,600 Collin County families eagerly lined up in cars outside St. Andrew United Methodist Church on Friday to receive a turkey.

The 7th annual Turkey Drive-thru, put on by the Storehouse of Collin County, has become a sight to behold.

“It is a logistical kind of challenge that you’re trying to work through,” lead volunteer coordinator Dave Murashige said.

It is, at times, chaotic, and at other times, organized to the sophistication of an airport tarmac.

Within a period of a couple of hours, crews worked to load up vehicles with a Thanksgiving meal, including turkey, fresh produce, and fixings.

Many rely on the services of the Storehouse for food or other services throughout the year.

The event was not open to the public, just to those who received vouchers in advance from the Storehouse. 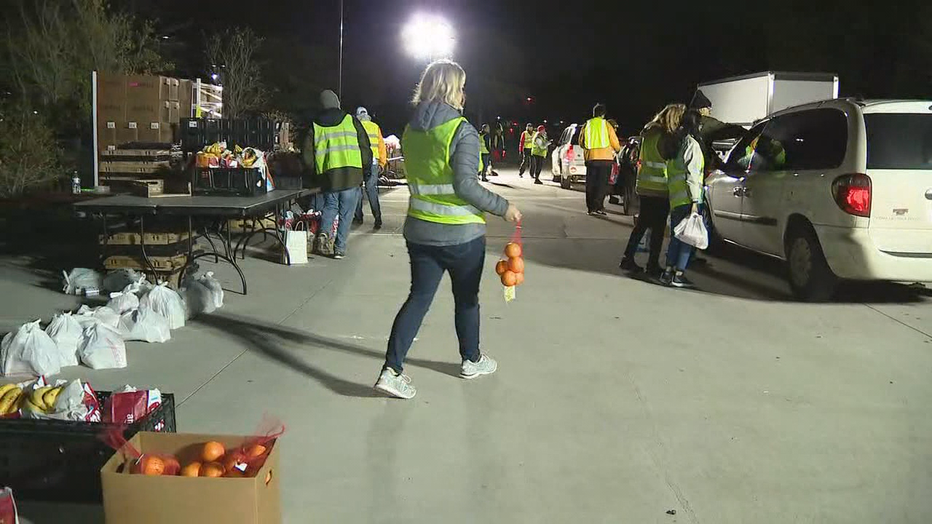 The impact of the gesture isn’t lost on the volunteers.

“They pour into you as much as you pour into them,” volunteer Ron Weaver said.

“It is the most rewarding thing that I think I’ve done, and maybe it took me a few years to figure it out, but it’s really been worth it,” Murashige said.

So while Thanksgiving may still be a week away, there were many giving thanks on Friday.

“This is my Thanksgiving, my Christmas, my everything,” one person said.

Organizers said they were able to get underwriting to cover the cost of 1,600 turkeys from the company Sports Value Consulting.

No doubt it all brought a smile to a lot of faces.