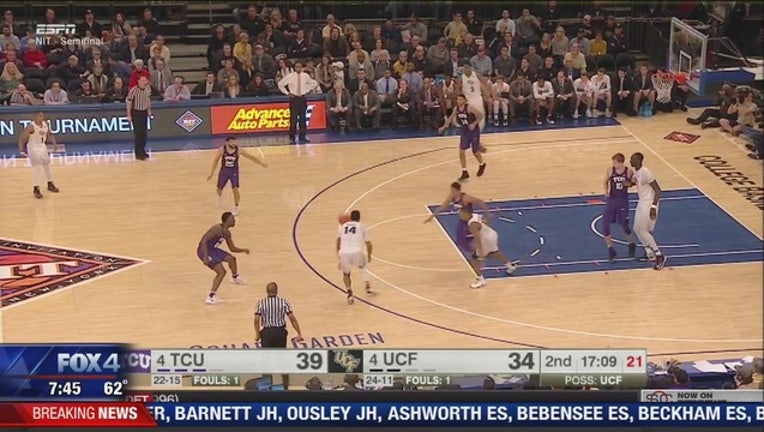 NEW YORK (AP) - Jamie Dixon was unsure what he had in Kenrich Williams.

Now he knows. So, too, does Central Florida.

"He's a player," Dixon said of Williams, who scored 12 of his 14 points in the second half to lift Texas Christian to a 68-53 win over Central Florida in a NIT semifinal game on Tuesday night.

"We love these guys," Dixon said. "We just want two more days with them. ... We'll look forward to getting ready for Georgia Tech."

Trailing by two at halftime, the Horned Frogs opened the second half with a 16-5 run to take a 45-36 lead. JD Miller sparked the run with three layups and a free throw.

"We were just talking about that in the locker room," Brodziansky said. "We have 20 more minutes and if we're going to last 20 more minutes, how about just try to come up with blocks and play our hardest? Try to execute."

TCU (23-15) was helped by Central Florida, which missed five of its first seven shots from the field in the second half.

For the game, Central Florida shot 33 percent, including missing 19 of 25 3-point attempts.

"I felt we were rushing," UCF coach Johnny Dawkins said. "I felt like we were frantic. Like we were getting fed up.

"We need to have a little more poise and unfortunately that's part of growth."

Despite all of TCU's strong play, UCF hung around for a bit. A.J. Davis' driving one-handed jam with nine minutes left sliced the deficit to seven at 52-45.

Davis is the son of former NBA player Antonio Davis, who was in the MSG crowd.

Williams' lay-in over AAC Defensive Player of the Year Taco Fall with 5:42 left pushed the lead to 56-45.

From that point, the Horned Frogs outscored Central Florida 12-8 to close out the game.

"We started (to) hit some guys, getting layups on some dump-offs."

"We just didn't make the shots that we normally make," Taylor said. "Give them credit."

CENTRAL FLORIDA: Overall, the Knights' second postseason NIT appearance was a success. Central Florida won three games in the tournament. "I'm proud of our team," Dawkins said. "Our team had a good year."

TEXAS CHRISTIAN: The Horned Frogs have qualified for the NIT seven times in program history. This marks the first time TCU has reached the NIT title game.

"I love this place," Dixon said. "I tried to get the message across to our players how special playing in Madison Square Garden is and how important it is."

CENTRAL FLORIDA: Season is over.