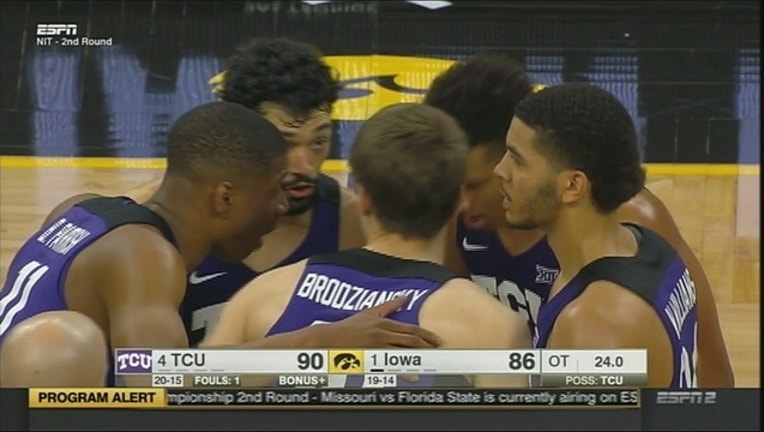 IOWA CITY, Iowa (AP) - Alex Robinson and Vladimir Brodziansky each scored 19 points and TCU survived 94-92 in overtime against No. 1 seeded Iowa on Sunday to advance to the NIT quarterfinals.

TCU was playing without starting guard Jaylen Fisher, who broke his wrist and is out for the season.

The Horned Frogs (21-15) led 84-82 in the final seconds when Iowa's Tyler Cook finished a layup to tie it and send the game to overtime.

TCU never trailed in the extra period, and a Kenrich Williams dunk with 3:02 left gave the Horned Frogs an 88-86 lead they held the rest of the way. TCU built a six-point lead with 24 seconds left. A Jordan Bohannon 3 for Iowa trimmed the lead to two (94-92), but the Hawkeyes ran out of time.

The Horned Frogs (21-15) will host the Oakland-Richmond winner Tuesday for a spot in the NIT final four.

Bohannon had a career-high 25 points for Iowa (19-15) and hit seven 3-pointers. Peter Jok added 22 in his final game as a Hawkeye.

The win is TCU's first ever against Iowa and the first meeting between the schools since 1948.