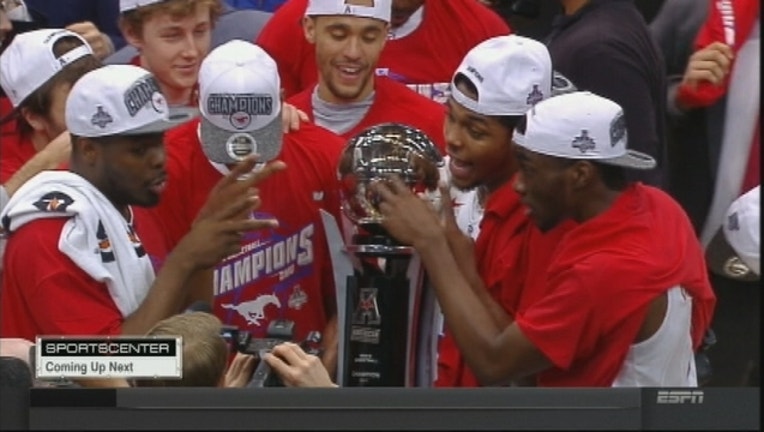 DALLAS (AP) - SMU coach Tim Jankovich isn't going to complain about a No. 6 seed for his 30-win team.

Sure, the American Athletic Conference champions probably deserved a higher seed. But the Mustangs, who generally put only six players on the court during games, got an extra day and the shortest possible trip for their NCAA Tournament opener Friday in Tulsa, Oklahoma.

"I'd rather stay excited. I hope our team feels exactly the same way. I don't feel cheated at all," Jankovich said. "I was worried we'd get a Thursday game. And we got to go to Tulsa, our closest venue. So it's crazy to stand up here to complain and whine. I'm thankful for all that we got."

Especially when remembering the hurt he felt for his players a year ago, when watching television and hearing all the talk about the NCAA Tournament that SMU was banned from playing in despite winning 25 games in Hall of Fame coach Larry Brown's final season.

"Nobody deserves what has happened this year more than they do," said Jankovich, Brown's top assistant the past four years. "It probably motivated them just a little bit each and every week that we've gone along."

There was also 2015, when in their first NCAA appearance since 1993, the Mustangs lost their opener 60-59 to UCLA after a questionable goaltending call against them on a 3-pointer in the final 13 seconds. And that came a year after watching the NCAA selection show with more than 1,000 fans and never hearing their name called for the 68-team field.

The Mustangs (30-4) take a 16-game winning streak into Friday, when they play the winner of Wednesday night's First Four game between Southern Cal. SMU lost to USC the day after Thanksgiving, but its only loss in 27 games since November was 66-64 two months ago at Cincinnati, another No. 6 seed from the AAC.

"It's something that we owed ourselves from the beginning of the season," sophomore Jarrey Foster said. "We wanted to be very successful."

All five SMU starters range between 6-foot-6 and 6-foot-8, and all average at least 9.9 points a game. Former Duke transfer Semi Ojeleye was named the AAC's player of the year and Ben Emelogu the league's top sixth man.

SMU last season had two-time AAC player of the year Nic Moore and top sixth man Markus Kennedy, but those seniors didn't get a chance to play in another NCAA Tournament because of sanctions that still have the Mustangs short-handed now.

This season's seniors include guard Sterling Brown, who has been part of a school-record 109 wins in his career, one more than forward Ben Moore.

Larry Brown was suspended for nine games and SMU banned from postseason play for one season after a September 2015 report involving academic fraud. The NCAA ruled that a former men's basketball administrative assistant completed online course work for a student to meet NCAA initial eligibility and be admitted to SMU.

Jankovich took over as head coach when Brown unexpectedly left last summer after being unable to agree on a new contract. Jankovich, 39-4 at SMU including the nine games filling in for Brown last season, has been talking to his team about the NCAA Tournament for more than a month.

"We've told them a number of times that we don't have to be anyone different than we are," Jankovich said. "Hopefully we'll play as well as we have been playing."

Ojeleye got in 23 games over two seasons with Duke after going there as a record-scoring prep scorer from Kansas. But he never appeared in a postseason game for the Blue Devils, and hadn't played a college game in nearly two full years before scoring 26 points in SMU's opener this season.

If the Mustangs win twice this weekend in Tulsa, they could face Duke in the Sweet 16 in New York.

"It would be fun to play against those guys, but we have to take it one game at a time," Ojeleye said. "You want to get there, but if you look too far ahead, it won't happen. ... You have to realize each day is something you have to maximize and take from there."