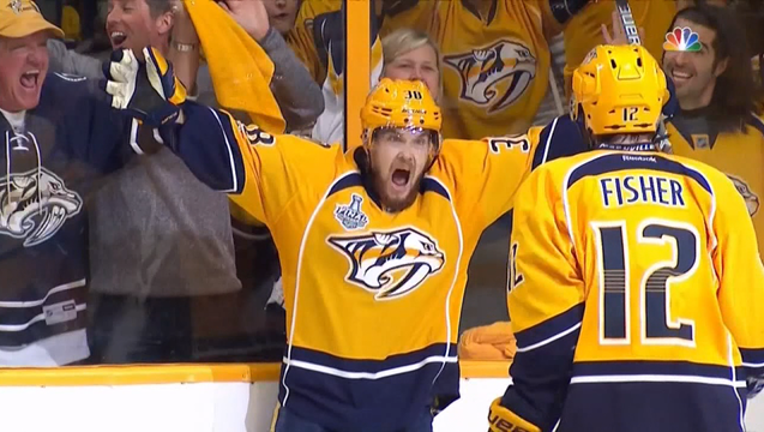 NASHVILLE, Tenn. (AP) - Frederick Gaudreau sure is doing his best to earn his own locker with the Nashville Predators with a Stanley Cup Final debut for the ages.

For now, he insists he is happy enough just to sit on the floor as long as he plays.

An undrafted free agent playing in just his sixth postseason game, Gaudreau scored the go-ahead goal 3:45 into the second period and Pekka Rinne made 23 often-spectacular saves as the Predators beat the Penguins 4-1 on Monday night to even the series at 2-2.

It's now a best-of-three sprint to the Stanley Cup, and Nashville is riding a wave of momentum after outscoring the defending champions 9-2 in the Games 3 and 4 of their Final debut.

Game 5 is Thursday night in Pittsburgh.

Gaudreau, a 24-year-old rookie, only has a chair in the locker room, but he now is the second player in NHL history to score his first three career goals in a Stanley Cup Final, joining Johnny Harms with the 1944 Blackhawks.

"He's been unbelievable for us the way he's come in, and he's just been so good, timely goals and composed," Nashville captain Mike Fisher said. "He definitely belongs, and he's been a huge part of our success."

Gaudreau is also just the third rookie to score game-winning goals in consecutive games in the Stanley Cup Final since the NHL took over sole possession of the trophy in 1926-27. Pittsburgh's Jake Guentzel did it in the first two games of this series and Roy Conacher did it for Boston in Games 3, 4 and 5 against Toronto in 1939.

Calle Jarnkrok, Viktor Arvidsson and Filip Forsberg also scored for Nashville, which improved to 9-1 at home and roared back after dropping the first two games of the series on the road.

"We were in a tough hole against a really good team, came home and took care of the home games with the help of all our great fans," Rinne said. "It's a great feeling. We played two really good games."

Pittsburgh star Sidney Crosby scored his first goal in the series after not getting a shot on goal in Game 3. The goal was his first in the Stanley Cup Final since June 4, 2009, a span of 12 games, but it wasn't enough as the Penguins lost two straight for the second time this postseason. Goalie Matt Murray lost consecutive games for the first time in his young career.

"It's hard to win when you score one goal," Pittsburgh coach Mike Sullivan said. "I thought tonight of all nights, we generated the most chances of the highest quality."

Nashville tapped country singer Dierks Bentley as the latest star to sing the national anthem, while Jason Aldean waved the towel to rev up the crowd. Former NBA star and TV commentator Charles Barkley also was on hand , accepting NHL Commissioner Gary Bettman's invitation to watch in person. Carrie Underwood admitted during the first intermission that she didn't get Fisher, her husband, a birthday present on Monday - holding out hope that a Stanley Cup championship celebration would do the trick in coming days.

"That's all I wanted for my birthday," Fisher said afterward of the big win.

Craig Smith ricocheted a puck off Murray's pads that Jarnkrok tapped in at 14:51 to start the fans yelling louder. Pittsburgh lost a challenge for goalie interference.

Just 66 seconds later, Crosby tied it up for Pittsburgh on a dazzling breakaway. He skated in on Rinne, holding the puck, faking a slap shot and then slipping one past the goalie for his eighth goal and 24th point of the playoffs. He also moved into 20th all-time in NHL playoff points but the Predators clamped down after that.

Rinne kept it tied in the early minutes of the second with a stop of Guentzel before a big save on Chris Kunitz on a breakaway. And then came Gaudreau's goal, confirmed only after the horn sounded and officials reviewed the play. They ruled Gaudreau's wraparound attempt slid the puck just over the line before Murray stopped it, giving Nashville a 2-1 lead 3:45 into the second.

"I heard it on the bench that it was possibly in the net," Gaudreau said. "I wasn't certain. When I heard the horn, I sort of thought it was in."

Crosby had another breakaway nearly midway through the period, and Rinne stopped him not once, but twice. Then the goalie slid to his right stopping Guentzel with an assist from Nashville defenseman Roman Josi. Crosby and Evgeni Malkin finished with six shots, but just the lone goal.

"It's a game of execution," Crosby said. "They capitalized on our mistakes, and we have to do the same."

Arvidsson made it a 3-1 Nashville lead with his first goal since the end of the first round. James Neal started the play, getting the puck to Fisher who fed the puck up to Arvidsson while falling to the ice. Arvidsson beat Murray under his glove, putting the puck just inside the right post at 13:08.

"If I make the save there, it could be a different game," Murray said.

Forsberg sealed the win with an empty-netter with 3:23 left.

Notes: Fisher, scoreless until the Final, now has four points with his fourth on his 37th birthday. ... With his goal, Crosby now has 161 career playoff points and moved past Mike Bossy, Gordie Howe, Al MacInnis and Bobby Smith for 20th all-time by himself. ... The Penguins now are 13-3 after a playoff loss under coach Mike Sullivan, and Murray is 7-1 in playoff games started after a loss. ... Rain kept the crowd outside from reaching the more than 50,000 who turned Saturday night for the first Stanley Cup Final game in Tennessee. Still, people filled three blocks of Broadway, even with Nashville opening up a downtown amphitheater for fans to watch. ... After the anthem, two catfish and one stuffed penguin hit the ice despite Nashville coach Peter Laviolette's video plea earlier Monday asking fans not to throw anything.