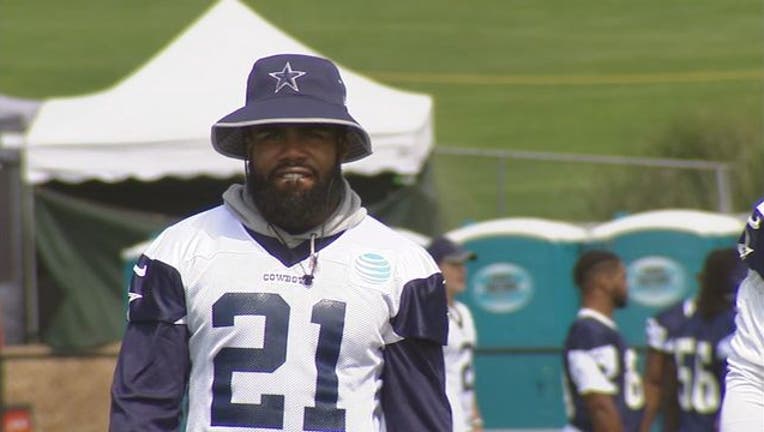 OXNARD, Calif. (AP) - Ezekiel Elliott stopped for a few moments to greet military personnel and pose for a few pictures on the opening day of training camp.

Just like that, the star running back of the Dallas Cowboys darted out of a large crowd of reporters and ran toward a fence to sign a few autographs.

Last year's NFL rushing leader as a rookie isn't talking to media members because of lingering issues off the field, but Elliott is still hamming it up with adoring fans. And he's also going through complete workouts a year after a hamstring issue limited his time in camp.

"I'm not even worrying about Zeke because that guy loves football," said receiver Dez Bryant, who had his share of trouble upon entering the league in 2010.

"I understand it's more than football. He's got a great supporting cast and he can't lose with guys like us around him."

The NFL has been investigating Elliott for more than a year over a domestic violence complaint that prosecutors in Ohio declined to pursue.

Owner Jerry Jones seems less convinced than he was a few months ago over whether the former Ohio State star will get suspended.

Elliott potentially damaged his standing a week before training camp by getting involved in a bar fight that ended with a 30-year-old man getting punched in the nose, although Elliott's name didn't appear in the police report.

Dallas police halted the investigation when the man who was punched couldn't be reached. Jones has said he doesn't have any other details on the incident.

While Elliott waits for word from the NFL, he's preparing for an encore to his 1,631-yard season that helped the Cowboys take the top seed in the NFC at 13-3 before losing to Green Bay in a divisional playoff.

Elliott, who turned 22 the day the Cowboys reported for camp in California, wasn't the only rookie sensation for Dallas. Dak Prescott won NFL Offensive Rookie of the Year honors with one of the best debuts for a quarterback in league history.

And Prescott has proven to be a solid citizen off the field after having to answer to a drunken-driving charge in his college town of Starkville, Mississippi, after the Cowboys drafted the former Mississippi State standout.

Prescott has since been cleared in the case, but was emphatic a year ago in saying it wouldn't happen again.

"I've made probably as many bad decisions as any of these guys have, only being 23, so I'm definitely not one that I can point fingers and be mad," said Prescott, who turns 24 Saturday. "All I can do is give from my young experience and the things that happened to me."

If the budding franchise quarterback can help his young backfield mate , he doesn't want to share that possibility publicly.

"But definitely he's a good friend," Prescott said. "So yeah, I mean, I take pride in helping him out every way on and off the field, yes."

Bryant clashed with veterans when he was a rookie and faced lawsuits over unpaid jewelry bills. He had a run-in with police over wearing sagging pants in a mall, and then a more serious brush with the law in a domestic incident with his mother.

Other than a few on-field tantrums, he's been mostly trouble-free the past five years. And now the 28-year-old is the dean of Dallas' receiving group.

"I had an older guy tell me once, you'll get it over time," said Bryant, an All-Pro in 2014. "That's for any young guy that's having any type of situation. Even if I intentionally did something or didn't mean to do something, you still got to go through some things to understand that's not how you do certain things."

Elliott's backup, Darren McFadden shares the experience and spotlight of being a fourth overall pick. McFadden was chosen in 2008, Elliott eight years later. Now they share the running back room.

"At the end of the day, you can't be right there with somebody every moment of their life," McFadden said. "I just try to give him the best advice that I can and go from there."